Following a report earlier this week from Nikkei Asia that claimed volume production of upcoming Apple Watch Series 7 models had been delayed due to manufacturing challenges, a new report has offered a more specific timeframe. 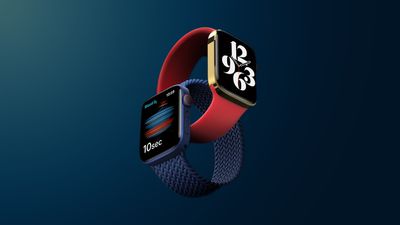 The manufacturing challenges are in large part due to the Apple Watch Series 7 having a new design, according to Nikkei Asia. The watch is expected to feature a new flat-edged casing based on information shared by Jon Prosser, host of the YouTube channel Front Page Tech, while Bloomberg's Mark Gurman reported that Series 7 models will be available in larger 41mm and 45mm sizes, compared to 40mm and 44mm sizes for the Series 6.

Nikkei Asia's report also claimed that the Apple Watch Series 7 will be able to measure blood pressure, but Gurman said this is not true.

In a separate report today, DigiTimes claimed that ongoing supply chain shortages will likely result in the rumored 14-inch and 16-inch MacBook Pro models with an Apple silicon chip and a mini-LED display being launched in October or November. The report cites sources who believe Apple's fall 2021 product launches will likely follow a similar format as fall 2020, with multiple events spread across several months.

The new MacBook Pro models are expected to have a new design with a flatter top and bottom, and several ports are expected to return, including an HDMI port, an SD card reader, and a connector for a magnetic power cable.

Joe_
Can we end the reports on DigiTimes already? All of their claims contradict themselves and they’re usually less accurate than most other sources.
Score: 12 Votes (Like | Disagree)

as Nikkei Asia had reported that Apple Watch Series 7 mass production was originally slated to begin around mid-September.

So mass production was set to begin *after* the keynote? Come on, DigiTimes...
Score: 9 Votes (Like | Disagree)

calstanford
Never read such BS than this Digitimes report. Apple produces many many weeks in advance because their sales are heavily focused on immediacy. A large part is sold ON DAY OF and not 6 months later.
Score: 4 Votes (Like | Disagree)

Kylo83
Come on how many times do we need to hear MacBooks coming in the fall October and November we know this already
Score: 4 Votes (Like | Disagree)

ProfessionalFan
Yeah no, mass production already began or the watch isn't coming until 2022 and I am pretty positive it already started.
Score: 4 Votes (Like | Disagree)
Read All Comments

Friday October 15, 2021 10:26 am PDT by Juli Clover
The Apple Watch Series 7 models lack a diagnostic port under the band, which means Apple has to use another means to troubleshoot and restore Apple Watches that come in for repair. Apple Watch Series 7 models are equipped with a module that enables 60.5GHz wireless data transfer as we discovered in FCC documents in September, with that data transfer capability designed to be used with a...
Read Full Article • 56 comments