Apple today announced the first U.S. states that will be rolling out the ability for residents to add their driver's license or state ID to the Wallet app on the iPhone and Apple Watch. Arizona and Georgia will be the first states to support the feature, with Connecticut, Iowa, Kentucky, Maryland, Oklahoma, and Utah to follow, according to Apple. 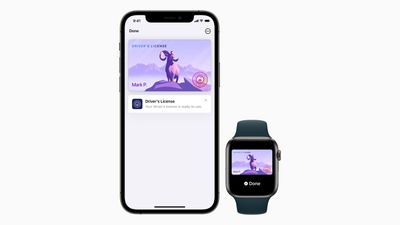 Apple is already in discussions with many more U.S. states as part of its plan to offer the feature nationwide in the future, according to Jennifer Bailey, Apple's vice president of Apple Pay and Apple Wallet, but no timeframe was provided.

The ability to add a driver's license or ID to the Wallet app is a feature of iOS 15, which will be publicly released later this year. Once a participating state begins offering this capability, customers will be able to tap the plus sign at the top of the Wallet app to begin adding their license or ID, and then simply tap their iPhone or Apple Watch on an identity reader at a TSA checkpoint, without taking out their physical card.

Apple said the feature is designed with privacy and security in mind. When adding a driver's license or state ID card to the Wallet app, customers will be required to take a photo of their face, which will be securely provided to the issuing state for verification. As an additional measure, Apple said users will be prompted to complete a series of facial and head movements during the setup process.

Upon tapping their iPhone or Apple Watch on an identity reader, customers will see a prompt on their device displaying the specific information being requested by the TSA. Only after authorizing with Face ID or Touch ID is the requested identity information released from their device, according to Apple. Users do not need to unlock, show, or hand over their device to a TSA security officer to present their ID, the company added.

Apple said its mobile ID implementation supports the ISO 18013-5 standard, which sets clear privacy guidelines for presenting an ID through a mobile device.

This feature will expand upon the Wallet app's existing support for student IDs at select universities and colleges in the U.S. and Canada.

Heck no. So if I need to show a police officer by DL I have to give them my phone. THen they take the phone to their patrol car which could contain equipment to copy data off my phone. Then we will have lawsuits around all of this.

From the Press Release:

* Driver’s licenses and state IDs in Wallet are only presented digitally through encrypted communication directly between the device and the identity reader, so users do not need to unlock, show, or hand over their device.
Score: 45 Votes (Like | Disagree)

GenesisST
Hopefully this will come to Canada one day

That being said, how long will it take before cops, TSA, etc are aware of this and you don't
have to teach them (or argue with them over it)?
Score: 25 Votes (Like | Disagree)

WestonHarvey1
Keep those batteries charged. Make sure you have spare cables in your car.
Score: 22 Votes (Like | Disagree)

I hope my state, Massachusetts adds this soon!
Score: 21 Votes (Like | Disagree)

dukebound85
yea, don't really want to be handing my phone over to the cops....