Samsung earlier this month unveiled the new Galaxy Z Fold 3, its latest flagship foldable smartphone. We thought we'd check out the Z Fold 3 to see the technology improvements that Samsung has made to its foldable smartphone lineup.

Subscribe to the MacRumors YouTube channel for more videos.
Foldable smartphones are still expensive, and as a Samsung flagship, the Z Fold 3 is priced starting at $1,799.99, which is more than you have to shell out for some computers. Of course, this is meant to serve as both a phone and a tablet, so there's a little more versatility than your average smartphone. 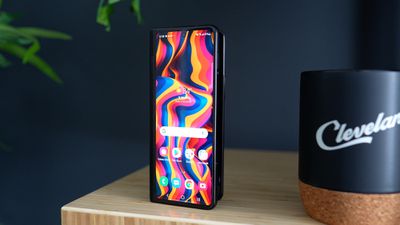 Design wise, the Z Fold 3 is Samsung's best foldable device yet because the camera is under the display for an all-display design. It looks great and while it's not entirely hidden, it maximizes available screen space.

The Z Fold 3 is a book-like device where the two sides come together in an inward fold. When folded, the outside display measures in at 6.2 inches, and when unfolded, it has a full 7.6-inch display inside. We found the display to be brighter, sharper, and more vibrant than Samsung's Z Fold 2.

Other than the fold and the in-display camera, the Z Fold 3 is basically on par with other smartphones. It has a 120Hz display, three 12-megapixel rear lenses, and a 10-megapixel front camera. It features IPX8 water resistance, a 4,400mAh battery, and a protective display film that's more durable than Samsung's past foldable devices.

The Z Fold 3 is Samsung's first foldable that supports the S Pen, and Samsung designed an S Pen just for the new smartphone. It has a tip that's designed to retract a bit while you're writing to prevent damage to the display, and it features the same S Pen functionality available with other Samsung devices. The S Pen is an optional add-on, though, so there's no dedicated storage.

As for the folding functionality, Samsung did a better job with the hinge this year and the folding mechanism feels more durable and like it will better hold up to damage.

At this price point, the Z Fold 3 is still a niche device that most people aren't going to want to pay the price for, but it's a definite improvement over the prior Z Fold 2. Samsung now has a few years of foldable device development on Apple, so it will be interesting to see how Apple's foldable iPhone measures up should one ever see a release.

wirtandi
Beautiful, beautiful piece of tech. Those saying foldable phones are trash, you wont buy them etc - wait until you see Apple release one and talk again
Score: 60 Votes (Like | Disagree)

syklee26
You won’t appreciate the foldable tech until you actually have used it. Samsung has done a remarkable job with foldables. Sure, it is not perfect by any means yet, but they are getting there.

before dismissing this and Samsung, give it a try. I can’t stand some Apple fanboys who always worship what Ale does and doesn’t do and dismiss everyone else’s effort to innovate.
Score: 55 Votes (Like | Disagree)

DJLAXL
Just got mine. I had a Fold 2 that I enjoyed very much, but the small design changes to the 3 makes it feel so much better in the hand (you know the procedures). Makes holding my work 12 Pro Max a chore now. I keep the Fold folded the majority of the time to answer quick messages, etc. I keep it open at home to consume media. Its an awesome, awesome phone. I used to be a Samesucks hater to the core, but they are definitely growing on me.
Score: 44 Votes (Like | Disagree)

That crease!
Elephant in the room that never gets mentioned even though it is it's fatal flaw

Have you actually used it? Nobody talks about crease once they use it because you won’t really notice it. Stop hating.
Score: 32 Votes (Like | Disagree)

MathersMahmood
I'm one of the lucky few that was sent the phone a week early and it's honestly fantastic. I haven't used my ipad since.

And the phone mode actually isn't that bad.
Score: 23 Votes (Like | Disagree)
Read All Comments

Monday December 13, 2021 12:13 pm PST by Juli Clover
Apple is not expected to introduce a foldable iPhone until 2023 at the earliest, with 2024 being the more likely target date, according to display analyst Ross Young. Rumors about a foldable iPhone have died down in recent months, but there continues to be evidence that Apple is at least working on prototypes of foldable devices. In September 2020, it was suggested that Samsung had provided f...
Read Full Article • 196 comments