An Apple II manual signed by Steve Jobs and Mike Markkula sold for $787,484 at auction this month after garnering 46 bids. 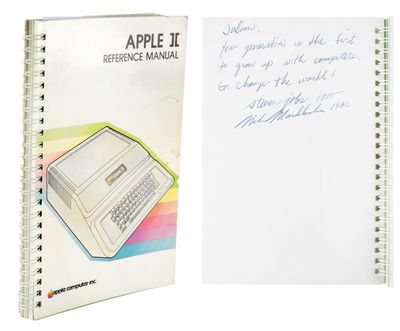 The 196 page manual was addressed to Julian Brewer, the son of Michael Brewer. Michael Brewer negotiated distribution rights for Apple in the UK in 1979, and the manual had a personal message inside. "Julian, your generation is the first to grow up with computers. Go change the world! Steven Jobs, 1980," read Jobs' note.

Julian recalls, "I was sitting in my bedroom writing games on my Apple II when Dad called me down to meet some guests. To my amazement it was Steve Jobs and Mike Markkula. I had the manual with me and only later understood how rare it was for Jobs to sign anything, let alone to write an inscription like this. He got on well with Dad, so I feel the inscription was made with care."

RR Auctions, the site that sold the Apple II manual, also auctioned off other Steve Jobs memorabilia that fetched high prices. A Steve Jobs' letter that said "I'm afraid I don't sign autographs" sold for $479,939, and a NeXTSTEP software package sold for $210,325.

A functional Apple-1 computer previously owned by Roger Wagner fetched $464,876, which is less than some prior Apple-1 computers have sold for. A signed 128K Macintosh Motherboard sold for $132,049, and an Apple Lisa Computer sold for $94,949.

Super rich people making silly purchases for fun. The equivalent of me buying an old Transformer on eBay for $20.

I remember a couple of years ago, I stopped into a grocery store and they had tomatoes and avocados on sale really cheap. So I bought some... and there is this seasoning salt that I really like... that I can only ever get there for some reason... but the bottle is like $3.99. A customer who was also in the tomato, and avocado area made conversation with me about how good the price was on them that day. I mentioned the seasoning salt to him and how I liked eating sliced tomatoes and avocados as a snack with some sprinkled on them. He saw the $3.99 price tag and said "Oh no! I can't afford to pay that much for salt!"

It really put things into perspective. How $4 is too much for some people to spend on a little treat.

nwcs
Super rich people making silly purchases for fun. The equivalent of me buying an old Transformer on eBay for $20.
Score: 9 Votes (Like | Disagree)

Psychicbob
I couldn’t afford an Apple computer in the early 80s so I got a ZX Spectrum instead. I didn’t change the world but I did git gud at Jetset Willy ?
Score: 9 Votes (Like | Disagree)

TGM85
Wow, Steve Jobs is for sure a hero of the modern world, but paying $66,000 for an old leather jacket because Jobs wore it in a silly picture? That's ridiculous.

I'm going to lift the paving stones outside the old Apple HQ at Infinite Loop and charge $10,000 each for them. After all, Steve Jobs walked on them every day for years.
Score: 6 Votes (Like | Disagree)

Dc2006ster
Love the jacket. I drive a small 2 seater Mazda and have thought a jacket like this would be cool but might possibly make me look like a right wanker.

I miss those manuals. I often feel that I am not using my Mac and its OS to its maximum potential because I do not have a manual that shows me all of its features and capabilities. I know there is a ton of published books and online stuff but I still miss those manuals.
Score: 5 Votes (Like | Disagree)

Wednesday November 10, 2021 2:09 am PST by Tim Hardwick
A rare fully functional Apple-1 computer has sold for $500,000 at auction this week, according to John Moran Auctioneers in California (via BBC News). The rare Hawaiian koa wood-cased Apple-1 has had only two owners, a college professor and his student to whom he sold the machine for $650. The sale included user manuals and Apple software on two cassette tapes. Apple co-founder Steve...
Read Full Article • 24 comments