Apple today announced a new Apple Music for Artists feature called Shareable Milestones, which is designed to allow ‌Apple Music‌ artists to share key milestones and successes with their fans on social media. 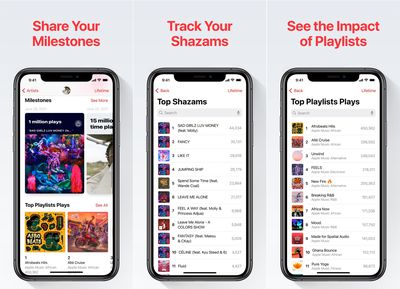 The ‌Apple Music‌ for Artists feature generates automatic milestones for artists of all sizes, which artists can highlight on social media networks. Milestones include new highs and all-time bests across Plays and Shazams, and inclusion in ‌Apple Music‌'s curated playlists.

Sharing milestones is a feature that's limited to artists at the current time and the images can only be accessed through the ‌Apple Music‌ for Artists iOS app.

Though limited to ‌Apple Music‌ for Artists at the current time, this is perhaps a feature that Apple could roll out to all ‌Apple Music‌ users in the future, allowing them to share metrics that are normally only available through the year-end Apple Music Replay and Recap features.

Apple Music for Artists is available to all artists who use ‌Apple Music‌. It provides artists and their teams with sales and streaming data for songs, albums, playlists, and more.

Search is clunky, used to perform better in iTunes ironically.
Albums view removed song list popover, now you are taken to a dedicated album screen to play a track having to go back to keep scrolling through albums.
Sound enhancer works as bad as it can be, fluctuates sound volume and delays to toggle off / on when sound output is other than music.
You cannot search within albums view, you have a dedicated search screen. Fine UX.
Sound crashes easily if you use the browser / other multimedia / chat app (even with the abomination messages!).
Mini-player won't float on full screen apps.
This crap was built to push users into Cloud music but even that they can't get right.

After a decade of lipstick on a pig like itunes they finally strip it but come up with an even worse version. Hats off.
Score: 5 Votes (Like | Disagree)

Reminds me of iTunes - Ping.

Do these Apple Music artists have time to be interacting with the fans through Apple Music App?

This is really smart! It gives artists of all levels the chance to spread positive news about them on social media which would bring more people to, or back to, their music at the same time as bringing more people over to apple music!

You think? To be honest I couldn't care less of how many copies of "Enjoy" the Descendents sold. I listen to it because it's an awesome album. Likewise I don't listen to "Hypercaffium" because it sucks, no matter how much Milo tells me it's great.
Score: 2 Votes (Like | Disagree)

mikeyteh
I just want to know if I can tell the fans of my ASMR heavy breathing albums about my 10 plays milestone. 9 plays from now.
Score: 2 Votes (Like | Disagree)

I know right.. playing dumb for a decade. New watch bands coming though.
Score: 1 Votes (Like | Disagree)
Read All Comments