Apple introduced a sweeping overhaul to its Safari browser's interface on iOS 15, iPadOS 15, and macOS Monterey, with a redesign that includes an address bar that floats at the bottom of the screen, changes to the way users switch tabs, and more. 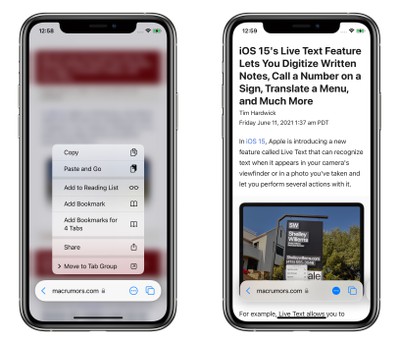 Apple says this new-look Safari has been "reimagined for the way we browse today." In ‌iOS 15‌, for example, Apple says the new floating address bar means Safari "maximizes your screen space and stays out of the way as you scroll and explore." However, some of the changes on both desktop and mobile have been heavily criticized by some users.

It turns out Google tried something similar in 2016 for its own home-grown browser. According to Chris Lee, a former Google designer, Google began developing a redesign for the Chrome mobile app called "Chrome Home" that was very similar to the one Apple is currently aiming at for Safari.

Lee was a staff interaction designer at Google at the time, and on his personal blog (via 9to5Google), Lee says he created the "original concept and pitch" for an "ambitious redesign of mobile Chrome's main UI."

It brought Chrome's toolbar to the bottom of the screen and turned [it] into a peeking panel that could be swiped to expose additional controls.

Swiping up on the address bar displayed the Discover and recent sites, Downloads, Bookmarks and History, while other features were accessible in a menu via an ellipsis (three dot) icon, which consolidated key browsing options and simplified one-handed operation in an era of growing screen sizes.

The feature gained a cult following among the tech community, but for many mainstream users, the change felt disorienting. Chrome serves billions of users around the globe with varying tech literacy. Over the course of many iterations, I became increasingly convinced that launching Chrome Home would not serve all our users well.

So just as I strongly as I had pitched the original concept, I advocated for us to stop the launch - which took not a small amount of debate.

Ultimately, the redesign was killed off in 2018. Lee suggests that though Chrome Home was short-lived that doesn't mean it was a wasted effort, but rather a lesson about "the intentionality needed to innovate within a product of massive scale."

For Safari users, the question now is whether Apple's mixed feedback from its beta testers will be enough to steer the browser's redesign towards an end result that's more broadly acceptable to its user base, or if the company's intention lies in forcing through a change that it believes will grow on people given time.

Updates to ‌iOS 15‌ Beta 3 and ‌macOS Monterey‌ Beta 3 suggest it could be the former: Apple has walked back some of the design changes it had in mind for Safari on both desktop and mobile, but we won't find out what the finished article will be like until both operating systems are released in September.

dazlicous
Hate the Safari on iOS 15 on my phone. that floating bar at the bottom is horrendous

Never mind swipe down to refresh. If on forums not good either if you wanna refresh to check for new posts
Score: 24 Votes (Like | Disagree)

contacos
Apple needs to rethink this abomination too. I am no longer using Safari on my iOS 15 testing device. It is annoying and not intuitive at all. How is anyone supposed to know you can press and hold on three different areas of the address bar to get different menus with additional options that are not part of the "..." so stupid.

I do not know how Apple is using the internet "today" but that is not it. Usually I scroll and read from the top downwards with most information being provided at the bottom because websites tend to have the navigation on top anyway. However, now that stupid address bar bubble is covering that very content I am trying to read!

makitango
The problem is that the prior bar was condensed into the top combined bar w/ the notch (even smaller when scrolling down) and you received the full screen all the way down from there. Now you lose all that acreen estate that the iPhone X was advertising for.

LawJolla
No one discusses the real issue... it's a complete mess for website that use bottom/footer navigation. Good luck clicking that chat icon for help.
Score: 11 Votes (Like | Disagree)

Hate the Safari on iOS 15 on my phone. that floating bar at the bottom is horrendous

Never mind swipe down to refresh. If on forums not good either if you wanna refresh to check for new posts

I think the redesign is fantastic. The New York Times app made similar changes, moving controls to the bottom of the screen, which also improved the experience.

But perhaps Apple could give users the option of going with the new design or the old for those who don't want to change.
Score: 7 Votes (Like | Disagree)

No one discusses the real issue... it's a complete mess for website that use bottom/footer navigation. Good luck clicking that chat icon for help.

This is the most annoying part. Apple expects the Internet to redesign for them.
Score: 4 Votes (Like | Disagree)
Read All Comments

Friday March 12, 2021 2:28 am PST by Tim Hardwick
Google's Chrome browser has been criticized for years for being a system resource hog, but Chromium developers are making some loud claims about how much smarter the latest version is at using and freeing up memory on macOS. According to a new post on Google's Chromium blog, Chrome developers recently managed to shrink the memory footprint of background tabs on Mac by up to 8%, or just over...
Read Full Article • 124 comments

Thursday April 15, 2021 1:09 am PDT by Tim Hardwick
Google today rolled out Chrome 90 to its stable channel, introducing automatic preference for HTTPS sites over the HTTP protocol, plus some other notable changes. By default, Chrome will now redirect all websites to use the more secure HTTPS protocol. Encrypted using Transport Layer Security (TLS), HTTPS secures communication over networks by authenticating the website and protecting the...
Read Full Article • 34 comments

Monday May 10, 2021 1:14 pm PDT by Juli Clover
Google today introduced Chrome 90 for iPhones, iPads, and the iPod touch, adding support for new Search and Dino widgets on devices running a version of iOS 14. There are three separate Chrome widgets available. There's a two tile search interface that lets you conduct a quick search with quick access to voice search and incognito mode, a single tile search widget, and a shortcut to play the ...
Read Full Article • 44 comments

Tuesday July 20, 2021 10:36 am PDT by Juli Clover
Google today updated its Chrome app for iOS devices to version 92, introducing a new feature that allows iPhone and iPad users to protect their Incognito tabs with Touch ID, Face ID, or a passcode. Locked Incognito tabs will not be visible until authenticated after leaving the Chrome app and reopening it, which will prevent someone who gets ahold of your device from viewing your Chrome tabs. ...
Read Full Article • 31 comments

Tuesday August 17, 2021 10:36 am PDT by Juli Clover
Apple in iOS 15 introduced a new Safari experience that moves the URL bar and tab interface to the bottom of the iPhone, a decision that has been controversial with iPhone users. Safari options in iOS 15 beta 6 Throughout the beta testing period, Apple has been tweaking the design of the Safari browser on the iPhone and in beta 6, there are further refinements. The bottom tab bar has been...
Read Full Article • 138 comments

Saturday February 20, 2021 12:52 pm PST by Sami Fathi
Under normal and lightweight web browsing, Google Chrome uses 10x more RAM than Safari on macOS Big Sur, according to a test conducted by Flotato creator Morten Just (via iMore). In a blog post, Just outlines that he put both browsers to the test in two scenarios on the latest version of macOS. The first test was conducted on a virtual machine, and the second on a 2019 16-inch MacBook Pro...
Read Full Article • 251 comments

Tuesday July 27, 2021 10:47 am PDT by Juli Clover
The fourth beta of iPadOS 15 that was released today introduces tweaks to Safari, with the Safari layout now mirroring the updated layout that was introduced in macOS Monterey Beta 3. The new Safari design in iPadOS 15 beta 4 Prior to this beta, Safari on iPad was similar to Safari on iOS with no dedicated tab bar, but after the update, Apple has added a dedicated tab bar that's activated by...
Read Full Article • 56 comments

Thursday March 18, 2021 4:33 am PDT by Tim Hardwick
Google today rolled out its live caption transcription feature to version 89 of Chrome browser for desktop, as first spotted by XDA Developers. Previously only available on some Pixel and Samsung phones, Live Captions uses machine learning to create a real-time transcription for videos or audio played through the browser, making online media more accessible for members of the Deaf community ...
Read Full Article • 30 comments