Apple has released a beta version of Safari 15, distinct from the Safari Technology Preview, for macOS Catalina, featuring the app's redesign that accompanies macOS Monterey. 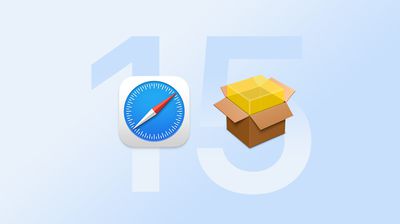 The Safari 15 beta was first spotted by 9to5Mac, but contrary to reports that it is only available to download using the AppleSeed Program via an exclusive invite from Apple, the beta is in fact open to all users with a developer account.

Earlier versions of Safari 15 included a significant redesign that did away with the dedicated URL and search interface, instead allowing any individual tab to be used for navigation input. Tabs were also all arranged at the top of the display to minimize the space taken up at the top of a Safari window.

After a number of complaints about the new interface from users, macOS Monterey beta 3 made these design changes optional. Safari 15 also includes new features such as tab groups and a redesigned sidebar.

The Safari 15 beta and the ‌Safari Technology Preview‌ allow users of macOS Catalina and macOS Big Sur to try the new design and features without needing to update their entire Mac's OS to a beta version of ‌macOS Monterey‌.

Nevertheless, 9to5Mac reports that some users are also being invited by Apple to join the AppleSeed program to try a pre-release version of Safari 15 and provide feedback.

Unique Visuals
NO, No thank you Apple. Stop trying to fix problems that don't exist for the majority of the people. Im sick of having to drill down to find things that used to be right there where you needed them. At most make it an option for those that think this is better.

After reading many articles on other browsers that tried this appoach and failed. Why Apple?
Score: 5 Votes (Like | Disagree)

ruka.snow
Glad to see they are sticking with the new design. I am very much looking forward to reclaiming some vertical space after losing it to the Big Sur UI update.
Score: 4 Votes (Like | Disagree)

adamclarkthomas
Really needing to know deep in my soul whether 15 will come down to Mojave.
Score: 4 Votes (Like | Disagree)

Really needing to know deep in my soul whether 15 will come down to Mojave.

I’m wondering the same. I’m keeping my 2015 MacBook Pro on Mojave for the foreseeable future for compatibility sake. Not that it’s a big deal, since there are other web browsers I can use if Apple decides to drop support. My Adobe CS6 is what’s keeping me on Mojave, but I recently got an old Dell 820D and I am thinking about moving the license back to Windows so I can keep the Mac updated.
Score: 4 Votes (Like | Disagree)

B/D
I have one question:

If Apple can update Safari for Catalina then they can for sure update the Music app. There is no technical reason for which the Macs that can´t be updated beyond Catalina should be kept out of Apple Music lossless.
Score: 4 Votes (Like | Disagree)

oliverlubin
From this it’s clear they are not going to change direction on Safari’s new UI. Releasing this so more people can be “familiar” with the disaster when it launches. Too bad.
Score: 2 Votes (Like | Disagree)
Read All Comments

Friday October 1, 2021 10:50 am PDT by Joe Rossignol
Apple on late Thursday seeded the first beta of Safari 15.1 for macOS Big Sur and macOS Catalina to developers for testing. Safari 15.1 beta is also included in the eighth beta of macOS Monterey seeded earlier this week. The release notes for the Safari 15.1 beta are largely recycled from the initial release of Safari 15, but in our own testing, the beta appears to fix an issue where...
Read Full Article • 55 comments

Wednesday October 20, 2021 6:24 pm PDT by Eric Slivka
Following in the footsteps of the macOS Monterey release candidate seeded earlier this week, Apple has released a fourth beta version of Safari 15.1 for macOS Big Sur and Catalina to developers that restores the previous tab design that was in place prior to Safari 15. Safari 15.1 now features a standard Big Sur tab design, which is enabled by default and is labeled "Separate" in Safari...
Read Full Article • 55 comments

Thursday December 8, 2022 2:45 am PST by Sami Fathi
Apple yesterday announced that end-to-end encryption is coming to even more sensitive types of iCloud data, including device backups, messages, photos, and more, meeting the longstanding demand of both users and privacy groups who have rallied for the company to take the significant step forward in user privacy. iCloud end-to-end encryption, or what Apple calls "Advanced Data Protection,"...
Read Full Article • 162 comments