Aqara HomeKit accessories are now available from the Apple Store Online in a range of European countries, the company has today announced. 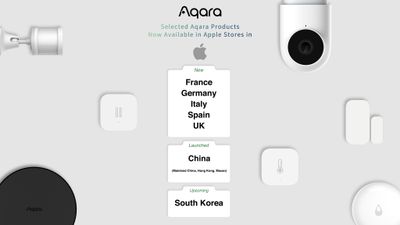 Aqara products will be available from the ‌Apple Store‌ Online in France, Germany, Italy, Spain, and the UK. To date, Aqara products have only been stocked in Apple Stores in Mainland China, Hong Kong, and Macao.

The product lineup for Apple Stores in Europe include the Hub M2, Aqara's latest smart home hub, and the Camera Hub G2H, which features HomeKit Secure Video support and home hub capability, as well as the company's Door and Window Sensor, Temperature and Humidity Sensor, and Vibration Sensor.

Aqara has become one of the most popular smart home brands among users with its repertoire of over 100 HomeKit-compatible accessories, including smart home hubs, home security cameras, sensors, wired and wireless smart switches, smart plugs, curtain and roller shade controllers, and smart door locks.

Aqara also today announced that it plans to bring its products to Apple Stores in South Korea, as well as expand its presence in Europe and other regions, in the coming months.

Update 07/28/21: Aqara has now announced that its products will be available via Amazon in the UK. The company plans to add Amazon France and Amazon Germany in the coming months. For 10 percent off Aqara purchases from its UK Amazon store, use the promo code AmazonUKPR. The offer is valid through July 30.

matrix07
Stop with this hub thing. We want thread!
Score: 4 Votes (Like | Disagree)

You can use these with any zigbee hub you already have?!
I already have a hue hub, so these should be able to communicate through that one?

I don't use hub. Thread doesn't need hub and that's where HomeKit devices should go.
Score: 4 Votes (Like | Disagree)

contacos
This just shows again how much I hate the Apple online store. I have no idea how to get to this category. Where is it hidden? How do I get to it? I literally had to Google Aqara + Apple to get to a direct landing page (same with getting to the AirTag page actually)
Score: 3 Votes (Like | Disagree)

You won’t be able to add Aqara devices to 3rd party Zigbee hub. Only Aqara or Xiaomi getaway.

Not true. You can use Aqara devices with many third party gateways. I have a number of leak sensors and a temp/humidity one attached to a Deconz gateway. You won’t get native HomeKit, but you can still get them into HomeKit via Homebridge or Home Assistant if you wanted to go that way.
Score: 1 Votes (Like | Disagree)

what is the battery life of a thread sensor (motion, window, temperatur, push button whatever）？

No less than Bluetooth ones.
Score: 1 Votes (Like | Disagree)

Stop with this hub thing. We want thread!

You can use these with any zigbee hub you already have?!
I already have a hue hub, so these should be able to communicate through that one?
Score: 1 Votes (Like | Disagree)
Read All Comments