Apple was the number three worldwide smartphone vendor in the second quarter of 2021, according to smartphone shipment estimates shared today by Canalys. 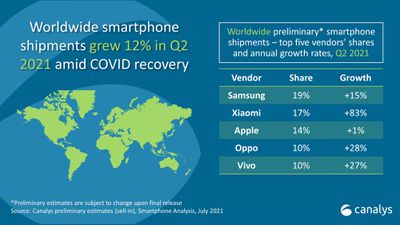 Apple's iPhone sales were surpassed by smartphone sales from Samsung and Chinese smartphone maker Xiaomi, with Xiaomi surpassing Apple and taking the number two spot for the first time.

Xiaomi's growth is thanks to overseas business, with the company increasing shipments by more than 300 percent in Latin America, 150 percent in Africa, and 50 percent in Western Europe. Xiaomi is known for selling more affordable smartphones, and its average selling price is around 75 percent cheaper than Apple's iPhones.

Going forward, to overtake Samsung, Canalys suggests that Xiaomi will need to increase its sales of high-end devices like the Mi 11 Ultra, which is priced at over $900.

So a major priority for Xiaomi this year is to grow sales of its high-end devices, such as the Mi 11 Ultra. But it will be a tough battle, with Oppo and Vivo sharing the same objective, and both willing to spend big on above-the-line marketing to build their brands in a way that Xiaomi is not. All vendors are fighting hard to secure component supply amid global shortages, but Xiaomi already has its sights set on the next prize: displacing Samsung to become the world's largest vendor.

Global smartphone shipments vary from quarter to quarter, and it's usually Apple and Samsung taking the first and second spots. In the fourth quarter of 2020, Apple was the number one smartphone vendor in the world due to strong sales of the iPhone 12 models, so Apple may overtake Xiaomi in subsequent quarters as the launch of the iPhone 13 approaches.

farewelwilliams
Xiaomi is that kid in school who copied off of your homework and told everyone he got good grades.
Score: 39 Votes (Like | Disagree)

Apple is so lucky that these reports are out there. It makes all the many anti-trust challenges that Apple faces much easier to defend against. Apple just has to point to their relatively modest portion of the market. Meanwhile Apple gets to sit there with a monopoly on iOS, all software sales into iOS, access to all users of iOS, and huge lead in the quality of the chips running the phones (and a monopoly on using those chips).

apple controlling the platform they built from the ground up isn't a monopoly
Score: 27 Votes (Like | Disagree)

Apple_Robert
I will stick with number 3 Apple for the win. :D Not interested in Xiaomi's Android devices.
Score: 24 Votes (Like | Disagree)

ghanwani
Apple is about quality not quantity. In this case, quality is average selling price.
Score: 17 Votes (Like | Disagree)

Analog Kid
This can’t be true— I keep hearing Apple is a monopoly!
Score: 13 Votes (Like | Disagree)

Apple is about quality not quantity. In this case, quality is average selling price.

Wednesday December 29, 2021 7:13 am PST by Mitchel Broussard
2021 is about to come to an end, and as with years past we're tracking a few sales that are offering solid year-end discounts on Apple-related accessories. In this article, we've rounded up the best sales you can find online for Apple accessories from companies like Nomad, Speck, Twelve South, Belkin, Brydge, ZAGG, and more. Note: MacRumors is an affiliate partner with some of these vendors....
Read Full Article • 1 comments