Apple is developing a new pay later service that will let customers pay for Apple Pay purchases in installments over time, reports Bloomberg. Installment payment options will be available for all ‌Apple Pay‌ purchases, with the feature not limited to Apple products. 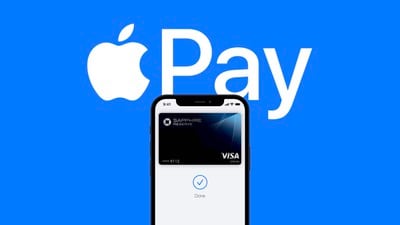 The service is similar to Paypal's Buy Now, Pay Later feature, and internally, it's being called "‌Apple Pay‌ Later."

The four payment play is called "‌Apple Pay‌ in 4" internally, while the longer-term payment plans are dubbed "‌Apple Pay‌ Monthly Installments." Users will be able to choose any credit card to make their payments over time with the ‌Apple Pay‌ Later plan, and it is not yet clear what interest rates will be.

As with the ‌Apple Card‌, ‌Apple Pay‌ Later users will need to be approved through an application submitted through the Wallet app on the iPhone, which is also where payments will be managed. The service will not require a running credit check. Some of the ‌Apple Pay‌ Later plans will exclude late fees and processing fees, costing users only interest for the longer-term plans.

Apple is hoping the buy now, pay later system will increase ‌Apple Pay‌ adoption and persuade ‌iPhone‌ users to use their ‌iPhone‌ to pay for items instead of standard credit cards. According to Bloomberg, the service is still in development and features could be changed or canceled before it launches.

I will have to disagree. As long as you are responsible, you can make good credit work to your advantage.
Score: 26 Votes (Like | Disagree)

ratspg
Companies are trying HARD to get people back on the debt wagon after lots of people paid them off in the last 12 months.
Score: 20 Votes (Like | Disagree)

Apple_Robert
If I can't pay for it in one payment, I don't get it. Works for me.

I haven't had cash on me for years now. I honestly don't even know what our "new" coins and bills look like (Sweden).
Score: 17 Votes (Like | Disagree)
Read All Comments

Tuesday August 3, 2021 1:53 pm PDT by Juli Clover
Apple is teaming up with Canadian payment services company PayBright to launch a buy now, pay later program for Apple products in Canada, reports Bloomberg. PayBright, which is owned by Affirm, offers payment plans that are designed to break the cost of a purchase down into biweekly or monthly installments. PayBright already works with a number of companies in Canada including WayFair,...
Read Full Article • 44 comments

Wednesday May 5, 2021 12:08 am PDT by Sami Fathi
As reported by local outlet The Verifier, Apple Pay has officially launched in Israel following multiple reports suggesting an imminent launch sometime this year. Ever since its launch in the United States in 2014, Apple Pay has slowly expanded to more countries worldwide while at the same time expanding the list of financial institutions that support the feature. With Apple Pay, users can...
Read Full Article • 23 comments

Wednesday September 8, 2021 4:25 am PDT by Tim Hardwick
Dutch bank de Volksbank has said it is bringing Apple Pay support to all its customers soon, including those of its subsidiary banks, reports iCulture. De Volksbank is the parent company of SNS, ASN Bank, and RegioBank, all of which operate in the Netherlands. "Apple Pay will be made possible for the customers of SNS, ASN Bank and RegioBank," a De Volksbank spokesperson told iCulture, adding ...
Read Full Article • 39 comments

Thursday August 19, 2021 5:13 pm PDT by Juli Clover
Apple today sent out emails letting Apple Pay users know about its latest promotion, which offers $2 off any footlong sub from Subway when using Apple Pay and the Subway app to make the purchase. To get the deal, customers will need to use the promo code APPLEPAY when checking out. The $2 discount is available through August 25, and it is applicable in participating U.S. restaurants only....
Read Full Article • 59 comments

Tuesday August 10, 2021 7:11 am PDT by Joe Rossignol
Two popular Japanese prepaid money cards will be gaining support for Apple Pay later this year, allowing the cards to be added to the Wallet app for contactless payments using an iPhone or Apple Watch where accepted, it was announced today. The cards set to gain Apple Pay support include Seven & I's Nanaco card and AEON's WAON card, as noted by Ata Distance. The blog, which focuses on...
Read Full Article • 13 comments