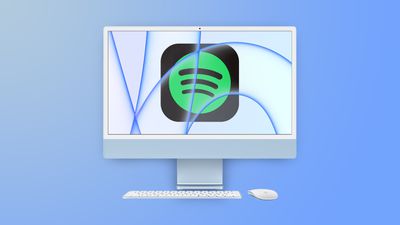 According to Spotify, the beta software features compatibility improvements and optimizations for the Arm-based ‌M1‌ systems from Apple.

The beta software can be downloaded from Spotify's community site, and Spotify is seeking feedback on how the software runs. The company says that because this is a beta, there could be some unexpected behavior, and user feedback will be used to tweak and improve the usage experience.

Spotify users have been asking for a native version of the Spotify app for ‌M1‌ Macs since the machines first launched last year, so this will be welcome news for Spotify users who have an Apple silicon Mac.

kalafalas
Now if only they would give us an actual native app instead of this electron garbage. I think catalyst would be a great option for them!
Score: 14 Votes (Like | Disagree)

When will they fix the horrible UI?

Their UI is MUCH more bearable than the one from Apple Music on macOS...
Score: 14 Votes (Like | Disagree)

Oh snap! The only thing that would make this comment better, would be for it to be true!

I've always wondered why people have such problems with AM lol. It has always served me well even when it was still iTunes, anecdotally speaking.

Apple Music on macOS is a nightmare of an app. Some examples:

* Unlike Spotify, the search is not instant, I have to hit return + it takes some time loading while Spotify gives me the results straight away while typing (sometimes I even have to hit return multiple times to get results)
* In the songs list, you can't click on an album name/artist to go to their page, you have to right-click and select it there instead
* apparently there are two forms of playlists, the one from the browse tab (where you can click on artists for example) and the ones that you've added to your library (where it's like the songs page, I can't click on anything).
* you can't drag and drop songs from playlists (that you're not following, so playlists from the browse tab) in your playlists but have to use right-click instead (might have changed meanwhile idk)
* sometimes songs take a few seconds to start playing while Spotify starts playing instantaneously
* and one of the biggest flaws: if you add songs to both your library and your playlist and later decide to remove it from your library, it automatically gets also deleted from all of your playlists

Spotify is far from being a perfect app, but their macOS app is SO MUCH BETTER in comparison. I really liked the iOS Music App, but the iTunes-like app for macOS is garbage.
Score: 11 Votes (Like | Disagree)

alpi123
Will they introduce fair pay for artists too?
Score: 9 Votes (Like | Disagree)

kzoojason76
Screw that... get working on native HomePod support!!!!
Score: 5 Votes (Like | Disagree)

Serban55
Beautiful, everything must be in place until 2023 when Apple will no longer support Rosetta 2
Score: 5 Votes (Like | Disagree)
Read All Comments