Apple today began notifying developers that they're able to use the new Xcode Cloud service that was first introduced at the Worldwide Developers Conference in June. 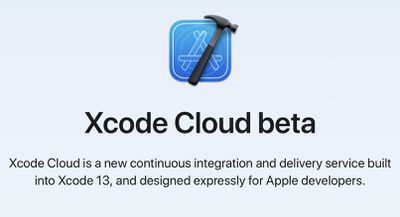 "We're pleased to let you know your account has been enabled for Xcode Cloud beta," reads the email sent out to developers. "You can now take advantage of continuous integration and delivery service built into Xcode 13."

Xcode Cloud is a cloud-based Xcode service that allows developers to build, test, and deliver high-quality apps in the cloud rather than directly on a Mac.

Xcode Cloud is a new continuous integration and delivery cloud service designed specifically for Apple developers. Built into Xcode 13, Xcode Cloud offers a fast and simple way for developers and teams of all sizes to build, test, and deliver high-quality apps even more efficiently. Xcode Cloud can automatically build apps in the cloud to free up developers' Macs for other tasks. Parallel testing in the cloud means developers can test on a simulated version of every current Apple device, then easily deploy a build of the app for internal testing, or deliver to external beta testers through TestFlight for instant feedback.

What is a CI/CD! How is it different than syncing your code ”projects” over iCloud? I’ve never used Xcode before so forgive my ignorance.

Quite a bit different. CI/CD is a pretty involved concept, but here’s a scenario that should give you a decent idea of how it’s useful in development:
[LIST=1]
* For example, say I and a partner have created a calculator app.
* One of our app’s functions is to sum a series of integers. While writing the app, my partner and I have written a series of corresponding tests to make sure that our code works as expected.
* In our test code, we would run that function with different combinations of numbers to ensure that we get the expected result each time — for example, if we run it with the numbers 3, 6, and 9, we know that the sum of the numbers is 18, so the function should return 18. And if we run it again with the numbers in a different order, we should of course still get 18 from the function. Rinse and repeat with numerous different combinations of numbers. (This sounds like tedious and mundane stuff, and in most cases it is, but it’s best to thoroughly check that even the simplest and most mundane code works exactly as you expect.)
* My partner made a change to our number-summing function and requests to merge his changes into the app.
* Here’s the CI (continuous integration) part: When the request is submitted, it automatically builds the project and runs our tests using the new code to make sure that we are still getting the results we expect out of the number-summing function, and any other functions that use it. Xcode Cloud allows for running the tests on numerous devices and device configurations.
* Say the change makes some tests fail when numbers are provided in a different order. If tests start failing as a result of the change, the failing tests will be indicated so that the problem can be isolated and resolved, or the changes can simply be ignored until a fix is found (if ever).
* Once our tests are passing (or, not recommended, even if they aren’t), here’s the CD (continuous delivery) part: Using Xcode Cloud we can “deliver” it straight to TestFlight for beta testing on real-world devices and eventually to the App Store.

Basically, it helps developers by automatically running tests in different configurations (to see if that’s the cause of failures) at important parts of the development process, which in turn encourages them to test their code, test all of their code, test it well, and test it again and again, which leads to better apps. Comprehensive and well-written tests, and running them repeatedly, can catch a lot of bugs before one finds out the hard way through, say, a bad App Store review.
Score: 8 Votes (Like | Disagree)

Basically, it helps developers by automatically running tests in different configurations (to see if that’s the cause of failures) at important parts of the development process, which in turn encourages them to test their code, test all of their code, test it well, and test it again and again, which leads to better apps. Comprehensive and well-written tests, and running them repeatedly, can catch a lot of bugs before one finds out the hard way through, say, a bad App Store review.

Well stated (and nice example). An interesting thought - since the CI bit is happening in Apple-controlled space, they... could potentially set things up to test against (virtual models of) as yet unreleased hardware, and unreleased bits of the OS (that support new hardware features), and end up in a situation where developers have already unknowingly rid their software of many problems associated with new hardware, so the apps are ready to go as soon as the new devices are announced. Still thinking it through, but it seems like there is some interesting potential there.
Score: 6 Votes (Like | Disagree)

but someone on these forums told me there was no competition to the App Store and therefore Apple stopped improving the developer experience.

Competition to the App Store, what does it mean?
Im my opinion, improved experience for developers would be possibility to run macOS on VM's legally on non-mac hosts, so more CI tools would be free to use. Xcode Cloud probably will be another subscription-based tool to squeeze money from devs and maybe even without real world service integrations (github/bitbucket/etc).
Score: 5 Votes (Like | Disagree)

Next Lawsuit:
I’ve spent all this time learning XCode, but I can’t use it to develop Windows apps. Apple needs to allow me to compile code to whatever I want to, even to Android devices!

I know you’re just being facetious, but you actually can compile Android code on a Mac. Android Studio runs just as badly no matter what platform you use.
Score: 4 Votes (Like | Disagree)

farewelwilliams
but someone on these forums told me there was no competition to the App Store and therefore Apple stopped improving the developer experience.
Score: 4 Votes (Like | Disagree)
Read All Comments