Facebook Aims to Take on Clubhouse With 'Live Audio Rooms'

Facebook this week launched its Clubhouse competitor in the U.S., called Live Audio Rooms, along with its new podcasts service, details of which we covered previously. 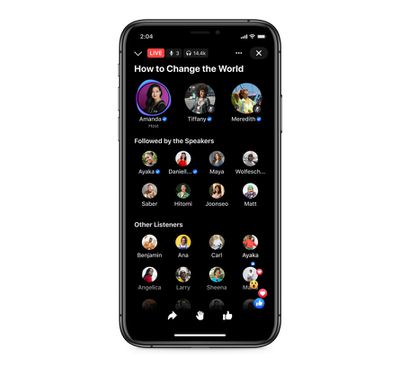 To begin with, Live Audio Rooms is only available to some public figures and certain groups, and can only be hosted through the Facebook iOS app, but both iOS and Android users can join a room, and the feature supports up to 50 speaking participants and an unlimited number of listeners.

While Clubhouse already has a solid user base, it limits the number of people who can enter a room, so Facebook's offering has one up on its rival from the off. Facebook users can also "raise a hand" to join a conversation, and use reactions to participate in real time.

In addition, Live Audio Rooms is set to receive more features that Clubhouse presently lacks, including notifications when friends or followers join a room and live captioning.

Live Audio Room hosts can also select a nonprofit or fundraiser to support during their conversation, and listeners and speakers can directly donate.

It's kind of hilarious and sad at the same time watching Facebook struggle with its identity of exactly what it wants to be.

I don't think this is true. Facebook wants to know everything about everyone's private business on this planet, so it sticks its hands/tentacles in everything. So this is definitely in line with its identity.
Score: 13 Votes (Like | Disagree)

andrewxgx
this is zuckerberg casually saying the clubhouse refused their acquisition offer ;)
Score: 7 Votes (Like | Disagree)

I don't trust Facebook with my recorded audio voices.

Sure, I'm right there with you, but nevertheless: billions of WhatsApp users don't have a problem with that at all...
Score: 6 Votes (Like | Disagree)

I don't trust Facebook with my recorded audio voices.

Wednesday December 8, 2021 9:15 am PST by Juli Clover
iOS 15 is meant to include several new features for the Wallet app, including support for car keys, hotel keys, HomeKit house keys, and IDs. Many of the features have yet to roll out, but as of today, Apple Wallet will begin supporting hotel keys. Hyatt, a well-known hotel chain, today announced that it is adopting Apple's Wallet technology and will be introducing Apple Wallet room keys...
Read Full Article • 36 comments

Friday December 2, 2022 10:54 am PST by Juli Clover
Google is continuing on with its attempt to convince Apple to adopt the RCS messaging standard, publishing a new "it's time for RCS" blog post. Promoted heavily by Google, RCS or Rich Communication Services is a messaging standard that is designed to replace the current SMS messaging standard. It provides support for higher resolution photos and videos, audio messages, and bigger file sizes, ...
Read Full Article • 507 comments

Friday December 2, 2022 11:43 am PST by Joe Rossignol
Goldman Sachs this week updated its Apple Card customer agreement to reflect the credit card's upcoming Daily Cash savings account feature, which was expected to launch with iOS 16.1 but appears to have been delayed. "To enable new ways to use Daily Cash like the upcoming Savings account feature, we are updating the Daily Cash Program section of your Apple Card Customer Agreement," reads an...
Read Full Article • 57 comments