Apple and other U.S. tech companies could be forced to open offices in Russia or face punitive measures, as part of a push by Russia to improve its internet "sovereignty." 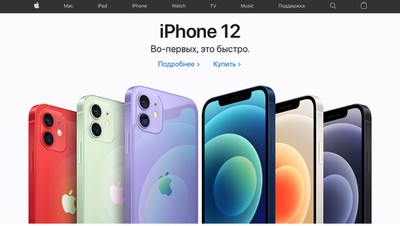 Russian lawmakers passed legislation last week that requires foreign sites with more than half a million daily users in Russia to set up a local branch or Russian legal entity, reports Reuters:

Websites that do not comply would be marked as being non-compliant on search engines, they could be excluded from search engine results, and banned from advertising in Russia and for Russians, the parliament said on its website.

The bill's authors argue that the current lack of such a requirement allows foreign sites to formally remain outside of Russia's jurisdiction.

The legislation has passed its third and final reading in the country's lower house of parliament, and now needs to be approved by the upper house and signed into law by President Vladimir Putin, which is widely expected to happen.

The latest move follows several actions by the Russian government that allow it to further tighten state control of online content in the country. In 2017, Russia banned VPNs and other software that enables users to gain anonymous access to websites.

Apple in 2019 complied with the country's law requiring data on citizens to be stored on local servers, and earlier this year it was forced to show iOS users in the country a list of suggested apps created by Russian developers when setting up a new device.

Russia has also targeted apps and services more directly if it considers them to be in breach of local digital laws. For example, Russia tried to ban encrypted messaging app Telegram after it refused to comply with requests that it hand over the encryption keys that would allow it to access users' data.

More recently, in March, Russia intentionally slowed down Twitter's internet traffic to punish it for not deleting what it considered to be "banned content."

The far left of the US are taking notes I'm sure.

The projection is strong with this one.
Score: 19 Votes (Like | Disagree)

Marbles1
I'm sure Apple, like most tech companies, will use virtual signalling, boast about their commitment to LGBT causes, green energy, and 'doing things the right way', but will also say 'WE COMPLY WITH LOCAL LAWS' and happily operate in awful regimes like China and Russia.
Score: 19 Votes (Like | Disagree)

beanbaguk
You have to love a good dictatorship! Power to the [S]people[/S], sorry, Putin!
Score: 16 Votes (Like | Disagree)

The far left of the US are taking notes I'm sure.

The far-right propaganda engine is clearly in full flow....
Score: 14 Votes (Like | Disagree)

ruka.snow
If companies want to operate outside their own borders then they'll have to start following local laws and paying local taxes. Russia has as much right to protect its interests and way of life as the USA does. That people think it is ok for websites and apps to break another countries laws because 'USA freedom!' is utterly daft.
Score: 13 Votes (Like | Disagree)
Read All Comments

Thursday June 10, 2021 3:23 am PDT by Tim Hardwick
U.S. President Joe Biden has withdrawn a series of executive orders from his predecessor Donald Trump banning Chinese apps TikTok and WeChat in the United States. Trump signed several executive orders banning apps tied to China during his time in office. In the most high profile order, Trump sought a ban of the short-form video app TikTok, which is owned by Chinese firm Bytedance, in 2020. ...
Read Full Article • 224 comments

Wednesday June 23, 2021 12:28 am PDT by Tim Hardwick
Apple CEO Tim Cook personally called U.S. Speaker Nancy Pelosi and other members of Congress to ask for a delay in considering new antitrust legislation proposals that seek to undo tech giants' market dominance, according to The New York Times. The antitrust bills were rushed, he said. They would crimp innovation. And they would hurt consumers by disrupting the services that power Apple’s...
Read Full Article • 127 comments

Monday July 5, 2021 3:45 am PDT by Tim Hardwick
Apple has been informed by China's cyberspace regulator that it must remove the Didi Chuxing ride hailing app from the Chinese App Store following concerns about the Uber rival's possible misuse of personal data. Apple CEO Tim Cook with Didi Chuxing president Jean Liu in 2016 The app in question is owned by Didi Global, which Apple has $1 billion invested in. Bloomberg reports that the ban...
Read Full Article • 98 comments

Monday July 5, 2021 12:12 am PDT by Tim Hardwick
Apple's crackdown on Chinese apps that tried to bypass its new privacy rules has successfully thwarted a coordinated effort to create a new way of tracking iPhones for advertising in the country, according to a new report today. Introduced in iOS 14.5, Apple's App Tracking Transparency rules require apps that access an iPhone's ad identifier or IDFA must ask a user's permission before...
Read Full Article • 39 comments

Monday June 21, 2021 2:52 am PDT by Sami Fathi
Germany's Federal Cartel Office, the Bundeskartellamt, today initiated proceedings against Apple on the claims of anti-competitive behavior related to the App Store, its products, and other services, according to a press release. The proceeding against Apple announced today will determine whether the Cupertino tech giant holds a "paramount significance across markets" and whether, through...
Read Full Article • 203 comments