Apple has been working on an Apple Store at the iconic Tower Theatre in Los Angeles for years now, and the new location is set to open later this month on June 24. 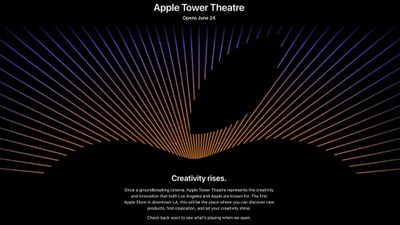 Apple Tower Theatre is the first retail store in downtown Los Angeles, and it's located in L.A.'s historic Broadway Theater District. This location was the city's retail hub for the first half of the twentieth century, and is now home to a dozen theater locations.

From the beginning, Apple has envisioned the Tower Theatre store as one of the world's most prominent Apple retail locations, and Apple has been overhauling the interior of the building to turn it into retail space and an active community area. Apple shared a rendering of what Tower Theatre might look like back in 2018.

The redesign preserves the ornate Renaissance Revival style of the interior of the theater, which was originally built to mimic the Paris Opera House with French, Spanish, Moorish, and Italian elements.

As with all retail locations, Tower Theatre will host free Today at Apple Sessions, and the location features a Forum and a Video Wall to facilitate interaction, according to 9to5Mac's Michael Steeber.

Prior to Apple's restoration of the location, Tower Theatre was in disrepair, which is why it took Apple so long to refurbish it. Apple used original Tower Theatre blueprints and photographs to restore original theater elements like murals, decorations, and the leaded-glass window over the entrance.

Apple has taken on other major restoration projects and those locations have become major flagships with some of the most memorable and iconic store designs. These include Covent Garden, the Opéra store in Paris, Apple Kurfürstendamm in Berlin, Apple Amsterdam built in the famous Hirsch building, Apple's Grand Central store in New York, and the Carnegie Library store in Washington, D.C.

citysnaps
Nice to see Apple spending the $ to preserve and restore historic buildings in disrepair, such as this one which was abandoned.
Score: 11 Votes (Like | Disagree)

mrr
Downtown Los Angeles on Broadway is awesome. So many great historic movie theaters, Grand Central market, the Bradbury Building, and now Apple in the restored Tower Theatre. I will be there on opening day!
Score: 6 Votes (Like | Disagree)

cmaier
Looking forward to driving down there in the next couple of months, and maybe taking in Disneyland again to celebrate the end of the pandemic.
Score: 5 Votes (Like | Disagree)

Looking forward to driving down there in the next couple of months, and maybe taking in Disneyland again to celebrate the end of the pandemic.

If you have a chance while you're in downtown LA and haven't seen it yet, check out Frank Gehry's Disney Concert Hall - an amazing space and design, inside and out.
Score: 4 Votes (Like | Disagree)