Apple has long been rumored to be working on plans for an Apple Store at the iconic Tower Theatre in Los Angeles, and today, Apple shared details on the upcoming location with the Los Angeles Times.

According to Apple, the Tower Theatre store will be one of the world's most prominent Apple retail locations when it is completed, with the company planning to entirely overhaul the interior of the building to turn it into retail space and an interactive community area. 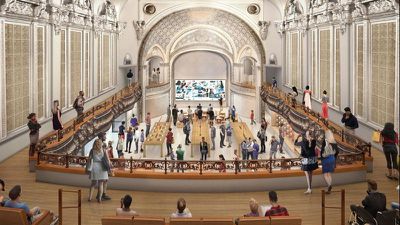 In a rendering shared by Apple, the Tower Theatre store preserves the ornate Renaissance Revival style of the interior of the theatre for an Apple Store that will indeed be one of the most unique. The building, which features French, Spanish, Moorish, and Italian elements, was built to mimic the Paris Opera House.

The Tower Theatre is in disrepair, though, and the area around it has become outdated, leaving the building's owners and city council members eager for Apple's revitalization efforts. Apple is using the original Tower Theatre blueprints and photographs to restore original theatre elements like murals, decorations, and the leaded-glass window over the entrance.

BJ Siegel, senior director of retail design at Apple, told the Los Angeles Times that Apple was inspired by the Tower Theatre's history and many of its firsts -- it was one of the first air conditioned buildings in Los Angeles.

"All of that cool technology inspires us because we are a technology company and we are bringing new technology to the place," Siegel said.

According to Siegel, while many people picture Apple retail stores as "big glass boxes," that's not true of all stores the company designs. Other similar stores include Covent Garden, the Opéra store in Paris, Apple Kurfürstendamm in Berlin, Apple Amsterdam built in the famous Hirsch building, Apple's Grand Central store in New York, and the planned Carnegie Library store in Washington, D.C.

The Tower Theatre location will be very different than other Apple retail stores in Los Angeles, says Siegel, describing it as "in the upper echelon of what Apple does."

Siegel expects some events at the upcoming store to draw hundreds of people, while other events will be planned for smaller groups. Apple will use part of the store for its Today at Apple sessions, where it provides tutorials and help with various Apple products, along with seminars and programs for children.

Apple is aiming to file plans with the city this week to gain approval for its planned renovation of the location.

diego
This is a huge disfavor for the historic theatre. I can't think of a less suitable location for a retail store than this space. So sad that a local, independent theatre company was not able to get this property.
Score: 23 Votes (Like | Disagree)

This is a huge disfavor for the historic theatre. I can't think of a less suitable location for a retail store than this space. So sad that a local, independent theatre company was not able to get this property.

I agree it would have been better if a local theater company had the millions of dollars required to restore the building and pay for its upkeep and productions. Even some of the Broadway theaters in New York with shows that have $3000 tickets get a little shabby.

Apple at least is trying to preserve the best features of the building which would not be the case if the place were used as a warehouse or simply torn down for glass condo building. This renovation will allow the building to survive for much longer and maybe one day in a time when the arts are valued again it could more easily converted back to a theater.
Score: 23 Votes (Like | Disagree)

Too garish for my taste. It's a phone company. Start acting like it.

Preserving history in a respective manner is garish? An Apple Store in this style should not be surprising given Apple's focus in blending fashion, technology, and the arts. The theatre has been abandoned for three decades now, and its great to see that it is finally being given a new life.
Score: 14 Votes (Like | Disagree)

lkrupp
I vividly remember the early days when Apple was shoved to a dark corner in the back of many electronics retailers, places like Best Buy, CompUSA, Circuit City, Ultimate Electronics. Then there were the independent Apple dealers in town, some good, many bad. Sears once carried an Apple II clone, the Franklin. Many Apple fans chafed at the poor treatment of Apple products by retailers. Many of us hoped Apple might finally have taken enough guff from these places and open their own stores.

When Steve Jobs announced the first Apple stores were coming marketing and retail experts literally fell out of their chairs laughing. Fast forward to today and they’re not laughing anymore. For years now Apple stores have generated more revenue per square foot than any other retailer. And their stores are the envy of marketing gurus the world over.

So add that to the list of reasons AAPL will probably close above $1trillion market cap today.
Score: 12 Votes (Like | Disagree)

rjlawrencejr
Many of you criticizing Apple’s plans come across as naive, pedantic, or just uninformed (and more than likely unfamiliar with Los Angeles). Should I remind you all, this was at one time a MOVIE theatre, for goodness sake - i.e. a retail establishment, not a live performance venue (not to mention, you already have a number of live stages in close proximity). There was/is nothing sacrosanct about this place outside of ornate design and its historic status which protects it from demolition. In its heyday, first-run motion pictures made by the large Hollywood studios was what they offered for sale. The whole reason it was abandoned was a reflection of the changing habits of consumers who no longer needed to come to Downtown LA for their shopping or entertainment needs and instead began to first frequent the area’s many drive-in theaters and later the large proliferation of multi-screen venues. A great many of the theaters along Broadway went dark and then saw new life as retail stores or houses of worship.

The way some of you reacted, you would think Apple was muscling out a bunch of independent businesses to build a retail Taj Mahal.

That Apple is now planning on moving into the space is merely a recognition of the fact that the population of Downtown LA has exploded in the past 20 years. This is not the same downtown I knew as a kid growing up in the late 70s and early 80s when downtown was primarily a place where you worked. But with 10s of thousands of residents in addition to the thousands who come in to work each day, as well as USC being nearby, building out a retail location is essentially a no-brainer. I will also add the long abandoned May Company/Hamburger’s department store building across the street is also undergoing a major transformation.

In my 51 years I can’t ever recall seeing moviegoers at this particular theater. Not only that, spaces get repurposed all the time. Grocery stores become office buildings. Bowling alleys become coffee shops. Movie theaters transform into houses of worship. Surely you are not saying if building X is built for a particular a particular purpose it must remain that way perpetually? Given that downtown already has large multi-screen venue at LA LIVE, believe me, (and as MRR explained regarding the economics of movie theaters today) there was little to no chance it was going to see life as a movie theatre ever again.
Score: 11 Votes (Like | Disagree)

This is a huge disfavor for the historic theatre. I can't think of a less suitable location for a retail store than this space. So sad that a local, independent theatre company was not able to get this property.

You are beyond delusional if you truly believe this. I can only assume you have never been in the area, because anyone who has would say this is an excellent move for both Apple, the surrounding area, and of course the building itself (Apple has a history of restoring old buildings wonderfully).
Score: 10 Votes (Like | Disagree)
Read All Comments