Apple's watchOS 8 updates often come with new watch faces, but this year, Apple only announced a single watch face for Portrait Mode photos. There may be another in the works, however, as an unreleased "World Timer" watch face was spotted in a UIKit developer session. 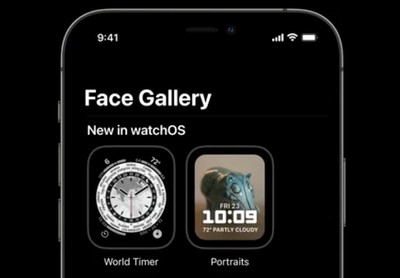 There were no details provided on this watch face, and it was accidentally pictured in a slide with multiple other iPhone screenshots.

The analog watch face has a world map with a 24-hour clock that has the names of major cities around it, allowing users to determine the current time in different worldwide time zones.

Design wise, the World Timer watch face is similar to some high-end watches that offer multiple time zone functionality, and it's also somewhat similar to the GMT watch face that lets you track two time zones.

The World Timer watch face is not in ‌watchOS 8‌ at the current time, so unless it was scrapped, it's something that Apple could be planning to add in a later beta update.

TheSynchronizer
All I want is a custom watch face store - this would send the Apple Watch to astronomical new heights.

Theyayarealivin
My favorite watch face! Long over-due. I hope it comes in rich colors such as red,
Black, navy blue.

tubular
Here’s the face that would finally convince me to buy an Apple Watch.

Still shocking there isn’t a swift ui-based watchface SDK/store yet.