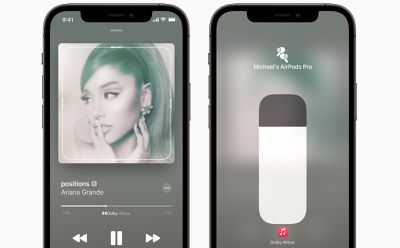 Spatial Audio, based on Dolby Atmos, is an immersive three-dimensional audio format that enables musicians to mix music so it sounds like the instruments are all around you in space. Thousands of Apple Music songs are available in Spatial Audio at launch, such as Lady Gaga's "Rain on Me" and Kanye West's "Black Skinhead."


Speaking with Billboard's Micah Singleton, Cue described Spatial Audio as a "real game-changer," adding that the Dolby Atmos-based feature is essentially the audio equivalent of "the first time you ever saw HD on television":

I've been waiting for something in music that was a real game-changer. The quality of audio has not been able to really rise because there hasn't been anything out there that when you listen to it, it truly is differentiated to everybody. It doesn't matter whether you're eight years old or 80 years old, everyone can tell the difference and everyone knows this one sounds better than the other one.

And the analogy to that is obviously the first time you ever saw HD on television: you knew which one was better because it was obvious. And we've been missing that in audio for a long time. There really hasn’t been anything that's been substantial. We'll talk about lossless and other things, but ultimately, there's not enough difference.
But when you listen for the first time and you see what's possible with Dolby Atmos with music, it's a true game-changer. And so, when we listened to it for the first time, we realized this is a big, big deal. It makes you feel like you're onstage, standing right next to the singer, it makes you feel like you might be to the left of the drummer, to the right of the guitarist. It creates this experience that, almost in some ways, you've never really had, unless you're lucky enough to be really close to somebody playing music.

Cue talked up Spatial Audio as a bigger deal than lossless audio, another new Apple Music feature that can be enabled starting today. Lossless audio refers to audio recordings that have been compressed without any reduction in the overall quality of the audio, which can result in an improved listening experience, although the difference between compressed audio and lossless audio is not always obvious:

Because the reality of lossless is: if you take a 100 people and you take a stereo song in lossless and you take a song that's been in Apple Music that's compressed, I don't know if it’s 99 or 98 can't tell the difference.

For the difference of lossless, our ears aren't that good. Yeah, there are a set of people who have these incredible ears, and that's one piece of it. There's the other piece of it, which is do you have the level of equipment that can really tell the difference? It requires very, very high-quality stereo equipment. What you find is, for somebody who's a true, for example classical connoisseur, they may be able to tell the difference in lossless. I can't tell personally -- I do the blind tests all the time with the team -- I can't tell.

Apple Music radio host Zane Lowe also spoke about Spatial Audio in an Apple Newsroom editorial, expressing that the feature is all about the emotion and feeling of music:

I'm fascinated to know how I might be emotionally moved by my favorite songs in a different way with Spatial Audio. Because it's all going through my ears and triggering something, right? That's what dawned on me when I was listening to these songs in Spatial: I was listening to these songs that I knew really well, but I was feeling something different. So, it's not even just about the way it's going to end up sounding, it's very much how songs are going to feel.

Spatial Audio on Apple Music will get even more immersive in iOS 15 with the addition of dynamic head tracking when wearing AirPods Pro and AirPods Max.

powerbook911
Lossless is the big deal to me.
Score: 25 Votes (Like | Disagree)

neuropsychguy
I agree with Cue on this. Lossless is useless to most people but this Spatial/Atmos audio is great and an improvement over stereo sound (again, my opinion).

It’s not necessary for all songs but is richer for the ones I’ve tried. For example, in Pearl Jam’s Come Then Goes a guitar lick sounds like you have your ear by the guitar rather than having the musician sitting in front of you. It does not wash out everything going on, there’s just better localization of sounds. It helps the song sound more spread out so it’s easier to appreciate the complexities of the music. This is a more immersive experience. It’s not for everyone but I really like it. It’s subtle on some songs but more pronounced on others.

I also tried some classical music. Now it’s sounds like you’re the conductor rather than listening to a recording. For example, the Imperial March played by the LA Philharmonic: [MEDIA=applemusic]us/song/1454543691[/MEDIA]

It doesn’t work with every song I’ve tried though. Some sound a little worse, but it could be the mixing rather than the technology. They don’t sound bad to me, just not as clean as the stereo mix. This has been the minority so far so I’ll definitely be keeping this feature on.
Score: 9 Votes (Like | Disagree)

Lounge vibes 05
I very much disagree.
I listened to the prince song, I listen to the Marvin Gaye song, I listened to The Weeknd album.
It’s definitely a nifty feature, having the artists vocals sound like they’re coming from a room that they’re in, instead of just speakers on your left and right side.
But for the majority of music, I’m still going to prefer stereo. Especially older music, the Marvin and prince songs both sounded like they were missing things, most likely because they probably were, things that were not on the multi tracks that were on the final master, and because I like to jam my music loud, and you just can’t do that when the artist Sounds like their feet away from you
Score: 7 Votes (Like | Disagree)
Read All Comments

Wednesday August 18, 2021 1:29 pm PDT by Juli Clover
Netflix is rolling out support for Spatial Audio on the iPhone and the iPad, based on reports shared by MacRumors readers and on Reddit. A Netflix spokesperson also confirmed to MacRumors that the rollout is underway. When playing compatible content in Netflix, Spatial Audio will be available as an option in the Control Center on iPhone and iPad for those running iOS 14 and iOS 15....
Read Full Article • 73 comments

Thursday July 22, 2021 12:20 pm PDT by Juli Clover
Apple today clarified details on which of its devices support Spatial Audio with Dolby Atmos through the built-in speakers, and it turns out that some older iPhones and iPads previously thought to work with spatial audio do not, in fact, offer the feature. In an updated support document, Apple says that the built-in speakers of the iPhone XS or later (minus the iPhone SE), the 11 and...
Read Full Article • 82 comments

Monday June 14, 2021 6:43 am PDT by Joe Rossignol
Just days after the launch of Spatial Audio on Apple Music, Apple has promoted the feature with a new "Beyond Stereo" ad set to "Mystery Lady" by Masego and Don Toliver. Spatial Audio, based on Dolby Atmos, is an immersive surround sound audio format that enables musicians to mix music so it sounds like the instruments are all around you in space. Thousands of Apple Music songs are available ...
Read Full Article • 100 comments

Wednesday June 9, 2021 4:52 am PDT by Tim Hardwick
In iOS 15 and macOS Monterey betas, Apple has quietly included a new audio feature called "Spatialize Stereo" that takes any non-Dolby stereo mix and creates a virtual spatial audio environment out of it. The addition was first discovered by a Reddit user, who had this to say about it: I assumed that if they ever did this it would warrant at the very least a mention in a Keynote, but unless ...
Read Full Article • 92 comments