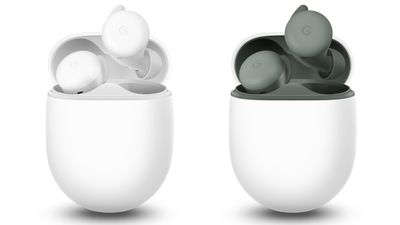 Google has also updated the design of the Pixel Buds A-Series to create a good seal in the ears while ensuring a comfortable fit. Google says they've been designed with a "gentle seal" and a spatial vent to reduce in-ear pressure.

There's no noise cancellation as in the AirPods Pro, but Google has added an Adaptive Sound function that increases or decreases the volume of the headphones based on your surroundings.

For calls, there are beamforming microphones to focus on voice and reduce outside noise, and there's built-in Google Assistant connectivity with real-time language translation and other "Hey Google" features.

Pixel Buds A-Series come in white and dark olive and feature up to five hours of listening time on a single charge or up to 24 hours with the included charging case, which is similar to the AirPods battery life. They're IPX4 water resistant and Google says they can be worn during a sweaty workout or in the rain.

Google's Pixel Buds A-Series likely won't be as appealing to most iPhone users as AirPods because AirPods have a lot of built-in integrations that are missing with Pixel Buds, but the significant price drop could perhaps inspire Apple to make its own earbuds more affordable in the future to compete.

Pixel Buds A-Series are available for preorder in the United States and Canada and will be arriving to customers starting on June 17.

iDento
In my opinion, 99$ is the right price for the AirPods too.
Score: 28 Votes (Like | Disagree)

jprmercado
The catch is that they send your earwax information to Google. ?
Score: 21 Votes (Like | Disagree)

But I just LOVE how their buds charger looks almost identical to Apples Airpods charger.

AirPods should be $129 and $149. I think that would put a real crunch on the competition.

I honestly think the basic AirPods should hit that $99 price point.
It's a 5 year old style and mostly dated tech/specs now.
Score: 6 Votes (Like | Disagree)
Read All Comments