Apple's latest iOS 14.7 beta appears to expand support for the Weather app's Air Quality Index feature to more countries and regions, based on user reports on Reddit and Twitter. 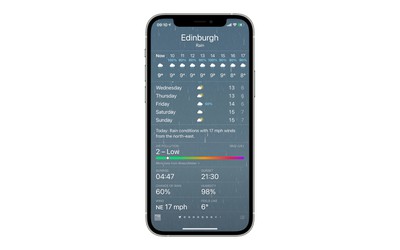 As noted by 9to5Mac, the feature is reportedly showing up for users in cities in the Netherlands, France, Italy, Spain, and Canada. Apple last expanded the feature in iOS 14.3 and iPadOS 14.3.

The Air Quality Index (AQI) is a measurement used by governments around the world to indicate the level of pollution in urban environments.

The AQI rates air quality on a scale from 0 (best) to 500 (worst), with values of 151-200 rated Unhealthy, 201-300 Very Unhealthy and 301-500 Hazardous. The measurement appears as a colored bar below the Weather app's 10-day forecast. AQI is also displayed in Maps and can be provided by Siri upon request.

iOS 14.7 appears to be a minor update, but we're likely to discover more small changes and improvements like this as Apple refines and propagates future beta versions before ultimately offering an official release for the general public.
Related Roundups: iOS 14, iPadOS 14
Related Forum: iOS 14
[ 22 comments ]

mrbluelips
Include a pollen count!
Score: 9 Votes (Like | Disagree)

AlexisV
The weather app is rubbish. It cannot display sunshine and showers, which is a common weather type in spring in the UK.

The icons simply show rain and a percentage next to them, so the week ahead just looks like constant rain. A rain symbol with 100% next to it simply means there is guaranteed rain at some point that day, not that it will be raining for 24 hours. And there is no indication of sunshine, so it could well rain for 5 minutes and be dry and sunny for the rest of the day!

It needs a sunshine and showers symbol.
Score: 6 Votes (Like | Disagree)

Hope Apple could select more local data instead of relying on American sources. The Weather app is very inaccurate here.

Exactly, also their chosen weather icon for the day is always weird. For instance, it may rain for 10 minutes at 3 pm today but the rest of the day is sunny, however the general weather icon for today is "rain". I am looking out of the window like ... no?
Score: 3 Votes (Like | Disagree)

I noticed the exact same issue. Seems like changed the algorithm for the day icon and make it far more negative. Over here (Belgium) we have 10 day forecasts of only rain icons for over a month now. Because it rains at least once a day, even if it’s only 10 min. That’s called summer over here :) but looking at 10 days of rain in the app is truly depressing.
Score: 3 Votes (Like | Disagree)

adrianlondon
Switzerland has it now as well. However, I've not scrolled down when looking at the weather for months, so I've no idea when it first appeared.

Anyway, nice to know that it's "3 - Low" here. It's stormy and currently pissing it down with rain, which no doubt clears out loads of pollution. Not sure how "live" the reading is. Like the screenshot above, mine says "DAQI (UK)" so I assume that's where it's coming from.
Score: 2 Votes (Like | Disagree)

The weather app is rubbish. It cannot display sunshine and showers, which is a common weather type in spring in the UK.

The icons simply show rain and a percentage next to them, so the week ahead just looks like constant rain. A rain symbol with 100% next to it simply means there is guaranteed rain at some point that day, not that it will be raining for 24 hours. And there is no indication of sunshine, so it could well rain for 5 minutes and be dry and sunny for the rest of the day!

It needs a sunshine and showers symbol.

The animated backgrounds do show that information, though. If it's raining, the background is rain. Foggy? The background reflects that.
Score: 1 Votes (Like | Disagree)
Read All Comments