Brydge, known for its range of keyboards designed for Apple's iPads, today introduced its latest keyboard offering, the Brydge Air MAX+, which is compatible with 10.9-inch iPad Air and 11-inch iPad Pro models. 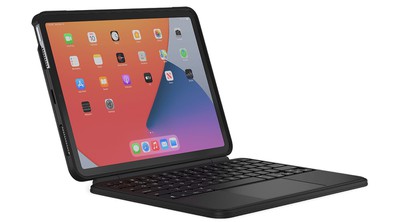 There's a detachable Magnetic SnapFit Case that the iPad fits into to keep it safe from scratches and other damage, with the case offering 4-foot drop protection. Brydge added an antimicrobial agent to the case to protect against bacteria and viruses.

Unlike Apple's own Magic Keyboards, the Brydge Air MAX+ connects to an ‌iPad‌ over Bluetooth, so it does need to be charged now and then. Brydge offers an "Instant-On" feature that's designed to allow the ‌iPad‌ to connect to the Max+ seamlessly when active.

Brydge also recently introduced the Brydge 12.9 Max+, which is compatible with the 12.9-inch ‌iPad Pro‌ models and offers all of the same features as the Brydge Air MAX+. We reviewed that model earlier this month and were impressed with its design and functionality.

The Brydge Air MAX+ can be preordered from the Brydge website for $149.99, and it will ship out in June.

mrat93
Let me chime in real quick before this gets busy…

Brydge and some reviews make it seem like the trackpad experience is nearly equivalent to the Magic Keyboard. This is not true. Scrolling is choppy and janky even with the new firmware, and Brydge has said nothing to say they’ve improved it on these new models other than making the trackpad bigger. Early hands-ons demonstrate this as well. this is especially noticeable on iPad Pro with its 120hz refresh rate.

I’ve been a brydge user for a while. I love the function keys and viewing angles. But I think for my 2021 iPad Pro, i’m gonna stick with the Magic Keyboard.
Score: 7 Votes (Like | Disagree)

connects to an iPad over Bluetooth

Given the cost of a magic keyboard I don't see the use case for an iPad Pro except for people who draw on it, or really really prefer to edit video on an 11" screen. Most people would be much better off buying a MBA and a basic iPad or mini. Touchscreens are long overdue on MacBooks. Maybe now that the M1's can run iOS apps and the Touch Bar is going the way of the AAUI connector on PowerBooks, we'll finally get a touchscreen upgrade option.

Most people that buy iPads do so because they LIKE iPadOS.

An MBA CANNOT replace an iPad.

I see that this is hard to accept for Mac/"real computer" snobs in these forums.

Only Mac/PC fans want to turn the iPad into something it is not.
Score: 4 Votes (Like | Disagree)

I don't really get the keyboard and trackpad for iPads. It turns it into a laptop that's thicker and heavier than a MacBook Air and a lot less useful and easy to use. If you want that get a MacBook Air!

What if 80-90 percent of the time you want you use your iPad as a tablet and only 10-20% of the time want to use a keyboard. This is me. A MacBook Air would be a huge waste of money and would have to come in addition to an iPad, not instead of one.
Score: 3 Votes (Like | Disagree)

gbfkicks
I recently bought the Logitech Folio Touch and it's fantastic. Smart Connector makes things incredibly smooth with no lag and there's no need to recharge it separately. Excellent product: multi-touch gesture controls on the trackpad, iPadOS shortcut keys, backlit keys that automatically adjust to your lighting