Apple's iPhone 13 models are expected to feature a slimmed down notch, marking the first major change to the TrueDepth camera system since it was introduced in the 2017 iPhone X.


We're still months away from the launch of the ‌iPhone 13‌, but Lewis Hilsenteger of Unbox Therapy managed to get an iPhone 13 Pro Max dummy model that represents what we can expect from the new 2021 device.

Dummy models often come out ahead of when new ‌iPhone‌ models launch to give case makers an idea of what to expect, and while this one is available earlier than usual, it seems to match up with rumors that we've heard so far.

The dummy model is a Pro Max, so it features a fake 6.7-inch display, and it has a realistic design that's higher quality than most mockups. The 13 Pro Max dummy model looks similar to the 12 Pro Max when it comes to design, but there is a notable change to the notch. 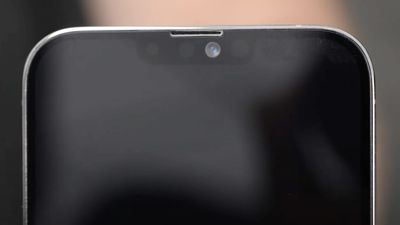 In line with rumors, the notch is slimmed down and less wide, with the four components of the TrueDepth Camera System located more closely to one another. The speaker has been relocated above the TrueDepth camera system rather than in the middle, which is the main reason why the notch is smaller.

There are no changes to the location of the volume and mute buttons or the power button, and there's a clear Lightning port. There were some early rumors that at least one ‌iPhone 13‌ model could have a portless design, but later information suggested that would not happen.

For more on what to expect in the ‌iPhone 13‌, we have a dedicated iPhone 13 roundup that aggregates everything we know about the new iPhones to date.

Apple_Robert
It is amazing how the size of the notch is so focused on by MR and other members.

Edited to add: Lewis is a hack and a clickbait revenue whore.
Score: 41 Votes (Like | Disagree)

countryside
Every time I watch a video by Lewis I feel bad for him. He is so wretchedly bitter at Apple.

EDIT: FYI, I am no iJustine fan either. I have come to like/respect MKBHD. He is not afraid to throw punches but also isn't blatantly hating on Apple the entire time.
Score: 24 Votes (Like | Disagree)

Also Lew is the worst. Such a slime ball.
Score: 21 Votes (Like | Disagree)

dingle19
This guy is worse than herpes. Can you stop promoting his stupid videos?
Score: 19 Votes (Like | Disagree)

satchmo
Yup, I see a dummy alright...and it's not an iPhone.
Score: 18 Votes (Like | Disagree)
Read All Comments

Tuesday October 20, 2020 8:48 pm PDT by Joe Rossignol
Apple's new iPhone 12 Pro Max is equipped with a 3,687 mAh battery, which is around 7% less capacity than the 3,969 mAh battery in the iPhone 11 Pro Max, according to a regulatory filing published by TENAA, the Chinese equivalent of the FCC. The regulatory filing, spotted by MacRumors, also lists the iPhone 12 Pro Max with 6GB of RAM as seen in benchmark results last week. Apple has filed ...
Read Full Article • 179 comments

Thursday December 10, 2020 9:26 am PST by Juli Clover
Apple's iPhone 12 Pro Max has the most advanced camera technology in the iPhone lineup, but how does it match up to flagship smartphones from other companies? In our latest YouTube video, we compared the iPhone 12 Pro Max to the Google Pixel 5 and the Samsung Galaxy Note 20 Ultra to see the differences in camera quality. Subscribe to the MacRumors YouTube channel for more videos. The $1099...
Read Full Article • 131 comments

Wednesday September 30, 2020 2:01 am PDT by Hartley Charlton
The upcoming "iPhone 12 Pro Max" is anticipated to have a number of unique high-end features not found on any other iPhone, such as its screen size, LiDAR scanner, faster 5G, and (increasingly less likely) a higher display refresh rate. The iPhone 12 Pro Max is also expected to be the largest ever iPhone, with a 6.7-inch display. Previously, the largest iPhones have been 6.5-inches in the...
Read Full Article

Wednesday February 3, 2021 12:55 pm PST by Juli Clover
Samsung in January debuted its latest flagship smartphone lineup, which includes the Galaxy S21 Ultra, a direct competitor to the iPhone 12 Pro Max that Apple introduced in October. In our latest YouTube video, we pitted the two smartphones against one another for a blind camera comparison. Subscribe to the MacRumors YouTube channel for more videos. In the video up above and the photos in...
Read Full Article • 102 comments

Monday November 9, 2020 12:07 pm PST by Juli Clover
When it comes to testing the camera features in new iPhone models, photographer Austin Mann's detailed reviews are second to none. iPhone 12 Pro Max reviews went live this morning, and Mann's in-depth camera test is also now available. Mann's review a must-read review for anyone who is interested in the iPhone 12 Pro Max for its camera, because this is the first year in some time that Apple...
Read Full Article • 124 comments