Just a week after Apple unveiled the AirTags, T-Mobile has announced the launch of the SyncUP TRACKER, an LTE-based tracking device that's designed to attach to items that are easily lost. 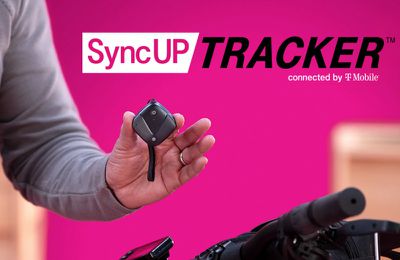 Because it connects to T-Mobile's LTE network, the SyncUP TRACKER does not need to be near a smartphone to be tracked over Bluetooth, so it can be tracked regardless of location. That means it is ideal for use with items that are separated from you, such as luggage when traveling by plane.

T-Mobile says that the SyncUP TRACKER can be "found virtually anywhere" and that it provides near real-time tracking and virtual boundary alerts even when it's located hundreds of miles away. Users can get notified when a SyncUP TRACKER moves out of range of a set boundary, there's an option to ring a lost item, and a built-in light sensor can detect light changes from light to dark so the device can tell if it's moved out of a backpack, locker, or other item.

Each SyncUP TRACKER can have a customizable profile with name and photo, plus there are options to customize how often it pings back to a smartphone in order to improve the TRACKER's battery life. SyncUP TRACKERs feature an IP67 water and dust resistance rating, and the built-in 900mAh battery lasts up to seven days before needing to be recharged.

Apple's ‌AirTags‌ last for up to a year on a single CR2032 battery, but T-Mobile's need to be recharged more often because LTE drains more battery life.

mansplains
I wonder what the roaming charges are when your luggage gets lost in another country
Score: 19 Votes (Like | Disagree)

King Of The Hill
I thought we were supposed to turn off cellular devices during the flight?
Score: 15 Votes (Like | Disagree)

nathan_reilly
having to charge once a week is a drag
Score: 11 Votes (Like | Disagree)

Vol Braakzakje
I hope when I lose my keys I have my powerbank connected to the tracker...
Score: 8 Votes (Like | Disagree)

vipergts2207
$5/month? That's a joke if I ever heard one. I thought charging $5-10/month for Apple Watches was bad.
Score: 7 Votes (Like | Disagree)
Read All Comments