Apple has yet to start testing the second prototype of its rumored AR glasses, bucking the expectations of its supply partners who expected testing to commence in the first quarter of this year, according to a new report. 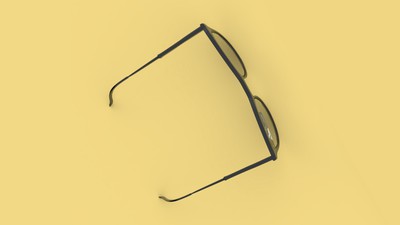 Apple is known to be working on a set of augmented reality glasses that look like regular glasses, but which feature lenses with built-in displays that can be interacted with using gestures. The current prototype is said to resemble high-end sunglasses with thick frames that house the battery and chips.

According to a DigiTimes report from January, Apple was about to enter the second phase of development of the glasses, with a focus on improving the device's weight and battery life, suggesting they could move into volume production as early as the first quarter of 2022.

However, a new report from the Taiwanese publication claims that P2 testing has yet to begin, therefore the chance of volume production in Q1 2022 is now unlikely.

The sources pointed out that after P2, the AR glasses prototype may still need to go through P3 testing, followed by another 2-3 phases of engineering testing before standing a chance of entering volume production.

A Bloomberg report in January described the glasses as "several years away," though Apple had initially been planning to release them as early as 2023. A previous report from DigiTimes suggested Apple's AR glasses would launch in 2021, while Apple analyst Ming-Chi Kuo has said he expects a 2022 launch at the earliest.

Apple is believed to be working on multiple AR/VR projects, including a headset with an App Store. In an internal meeting, Apple reportedly said the headset may be announced in 2021 and released in 2022, so it sounds like the headset will launch before the glasses. According to today's DigiTimes report, Samsung is still on track to launch a pair of rival AR glasses next year.

farewelwilliams
if only they could have...

but seriously, screw digitimes. this rumor is a sleeper.
Score: 5 Votes (Like | Disagree)

Be nice if they found a way to stop glasses steaming up when wearing a mask...

By the time these are released, masks will likely be a thing of the past
Score: 2 Votes (Like | Disagree)

DarkCole
It’s unfortunate the timeline for these are still a ways out. AR glasses are the one thing I’m truly excited for from Apple.
Score: 1 Votes (Like | Disagree)

LonderJan
I doubt this product (with the intention of volume production) even exists.

So far, nobody has succeeded in addressing the issues that prevent it from appealing to a broader audience which is their (Apple) target.

The audience that does seem the most likely to be considering something like this are those people who are already wearing glasses. So, this product would need to work with any type of prescription glasses out there without making them heavier. These would need to come in different materials, colours, shapes and sizes and most importantly, they should look like plain glasses.
Score: 1 Votes (Like | Disagree)

billk711
that cleared up absolutely nothing,
Score: 1 Votes (Like | Disagree)

Marbles1
Be nice if they found a way to stop glasses steaming up when wearing a mask...
Score: 1 Votes (Like | Disagree)
Read All Comments

Tuesday March 30, 2021 2:33 pm PDT by Juli Clover
Snap is designing a new set of "Spectacles" smart glasses that have augmented reality capabilities, reports The Information. Snap has sold several versions of its Spectacles, but current options do not have AR features and are instead equipped with a camera for uploading content to social network Snapchat. The augmented reality Spectacles will be aimed at developers and creators rather than...
Read Full Article • 53 comments

Tuesday January 5, 2021 7:06 am PST by Joe Rossignol
Apple is about to enter the "second phase of development" of an augmented reality glasses prototype, according to a paywalled preview of a DigiTimes story seen by MacRumors. The full report should be released by tomorrow with further details. In June 2020, Bloomberg's Mark Gurman reported that Apple is developing both an AR/VR headset and AR-only glasses. Gurman said prototypes of Apple's...
Read Full Article • 86 comments