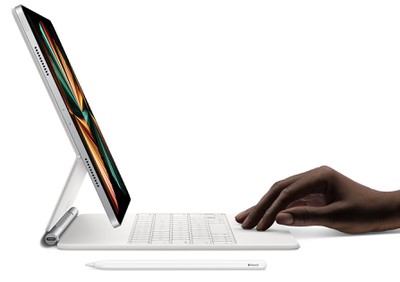 Both models come with up to 2TB storage and have higher RAM amounts at higher storage tiers, which can drive costs up.

A cellular 12.9-inch ‌iPad Pro‌ with 5G connectivity and the 2TB storage option costs a total of $2,399, which is actually more expensive than the highest-tier ‌M1‌ MacBook Pro and MacBook Air with all available upgrades.

The maxed out 11-inch cellular model will run you $2,099, which is just about as expensive as the maxed out ‌M1‌ MacBook Pro. Neither of those price points includes an Apple Pencil or a Magic Keyboard, both of which can be purchased separately.

Apple's new ‌iPad Pro‌ models will be available for order on April 30 and will ship out in May.

bluespark
The people who need to max this out will know exactly who they are, and they probably won't be paying for it themselves.
Score: 29 Votes (Like | Disagree)

Wildkraut
LOL 2400 for a device with a castrated OS, no thanks.
Score: 28 Votes (Like | Disagree)

contacos
Only to end up using iOS apps which are mostly optimized for the low end entry model iPad anyway, something doesn’t add up ... ?
Score: 20 Votes (Like | Disagree)

Spock
They are really going to have to overhaul iPadOS for this thing. I thought for a few seconds they were going to show it dual boot Big Sur when connected to the magic keyboard.
Score: 17 Votes (Like | Disagree)
Read All Comments