Apple today announced that the HomePod mini will be launching in additional countries in June, including Austria, New Zealand, and Ireland. 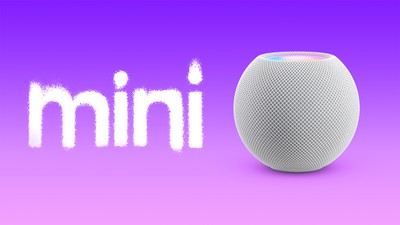 Pricing is set at €99 in Austria and Ireland, and $159 in New Zealand, with the usual space gray and white color options.

Last month, Apple announced that the full-size HomePod will be discontinued when supplies run out, with the company placing its focus on the HomePod mini. The smaller version of the HomePod received positive reviews upon its launch, with many people praising the speaker's impressive sound quality relative to its price tag and size. However, critics believe that Siri still lags behind other assistants like Alexa and Google Assistant.

WillFisher
As an Englishman living in NZ with his full sized HomePod and being a bit sad about HomePod being discontinued after all this time waiting... I'm excited for HomePod mini to be arriving here!!
Score: 4 Votes (Like | Disagree)

considering 3yrs is all it took for Apple to ditch the OG but kept the AppleTV 4K and upgraded it, I’m VERY sceptical of purchasing any smart speaker from Apple.
Up until last year I was FULLy against Sonos now I’m reconsidering since all the do is speakers and they’ll not quit ona product before fully giving it 150% to keep their business and revenues going. 1 product fails then light on the others gets grim and dim.

maple can focus on much more important products to make up the difference.

I'd be very surprised if Apple stopped supporting the original HomePod with software updates and service within the next 5 years.
With Apple its all about the brand and reputation, and as you've pointed out, trust.
I see the original HomePod as something of a good buy 2nd hand now that people are assuming the worst about it.
Score: 3 Votes (Like | Disagree)

Santabean2000
Stoked. Often miss out on things here at the bottom of the world (NZ).

TheAustrianGuy
Apple, you just got yourself a sale. Or two. Or three.
Score: 1 Votes (Like | Disagree)

Seoras
I've had the original Home Pod for a year now here in NZ (my Apple account is still a UK one).
Works just fine which asks the question - why did Apple wait until now?
I've been living in NZ for several years now, my family (wife and kids) are all Kiwis, but I still can't tell the difference between an Aussie and Kiwi accent. ;)
Is Apple claiming that Siri can? :)
Score: 1 Votes (Like | Disagree)
Read All Comments

Tuesday November 24, 2020 4:34 am PST by Tim Hardwick
The availability of HomePod mini is now at its lowest since Apple's new smart speaker went on sale last month, with shipping times across Europe having already slipped into next year in many cases. In the United Kingdom, France, and Spain, for example, the delivery time for a HomePod mini ordered today in either space gray or white is as long as five to six weeks, and in Germany has even...
Read Full Article • 128 comments

Sunday November 15, 2020 4:38 pm PST by Joe Rossignol
HomePod mini launch day is officially underway in countries such as Australia and Japan, where the calendar has already turned to November 16, and the first orders are beginning to arrive to customers. Track your shipment in the MacRumors forums. Instagram user shiology shared a photo of the white HomePod mini and its box. Daniel Feodoroff was one of the first customers in the world to...
Read Full Article • 161 comments

Thursday November 12, 2020 6:01 am PST by Joe Rossignol
Apple's embargo has lifted on reviews for the HomePod mini ahead of the speaker launching on Monday. In addition to our in-depth HomePod mini reviews roundup, we've gathered a collection of unboxing videos and sound quality tests below. As its name implies, the HomePod mini is a smaller version of the standard HomePod, standing just 3.3 inches tall. However, despite its more compact,...
Read Full Article • 70 comments

Thursday October 22, 2020 9:19 am PDT by Juli Clover
Apple last week introduced a new $99 HomePod mini, which is a more affordable alternative to the full-size HomePod that's been around since 2017. The HomePod mini isn't shipping out until November, but on paper, it sounds great for those who have been eyeing a HomePod but haven't wanted to shell out $299. Subscribe to the MacRumors YouTube channel for more videos. In our latest YouTube video, ...
Read Full Article • 194 comments

Tuesday November 17, 2020 12:13 pm PST by Juli Clover
Apple's new $99 HomePod mini officially launched yesterday, with the first pre-order purchases arriving to customers and Apple beginning in-store sales. We picked up a new HomePod mini and thought we'd test it out for MacRumors readers who are curious how Apple's smaller HomePod measures up to the original model. Subscribe to the MacRumors YouTube channel for more videos. The HomePod mini...
Read Full Article • 123 comments