Eve has today released a new version of the smart home connected Eve Light Switch featuring support for Thread, in what seems to be the first Thread-enabled light switch for any smart platform (via HomeKit News). 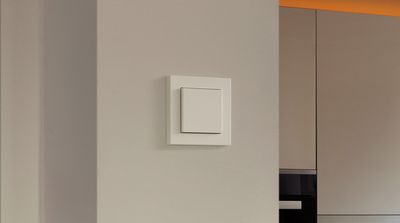 The Eve Light Switch, which is designed for the European market, can use both Thread and Bluetooth to connect to a smart home network, depending on which is available. It requires a neutral wire and is not compatible with existing switch plates, meaning that the only option is to use the one that comes with the Eve Switch itself.

Until now, Eve's popular smart home devices have mostly been Bluetooth-based, which attempted to avoid the occasional reliability issues of Wi-Fi networks, but came at the cost of slower response times. Thread technology is now proliferating through Eve's smart home products. The new Eve Switch is constantly powered, allowing it to expand the Thread network in a user's home as a Thread Router.

Eve Light Switch supports Bluetooth and Thread, and joins your Thread network automatically. As a router node, Eve Light Switch relays other Thread accessories' data packets and enhances the stability and reach of your smart home. Thread is also a pillar of CHIP – the smart home standard of the future.

Apple has begun looking toward open standards in the smart home space, working with other companies such as Google and Amazon to develop a universal standard for smart home products. Apple's commitment to open standards and Thread within HomeKit was demonstrated by the launch of the HomePod mini last year, which is the first Thread-enabled Apple device.

Although the HomePod mini supports thread, it only serves as a Border Router, unlike the Eve Light Switch, which works as an entire Thread Router. Thread accessories do not need a proprietary bridge to communicate with each other, instead only needing a Border Router like the ‌HomePod mini‌. The new Eve Light Switch puts the company center-stage with the advancement of Thread in conjunction with ‌HomeKit‌.

The Eve Light Switch is priced at €99.95 and is available now from the Eve website.

return2sendai
$100 for a light switch! The world is insane. I’d only buy it if, when I turn it on, I get a better idea of what I should have done with my ridiculous amount of disposable income and take it back to the shop.?
Score: 9 Votes (Like | Disagree)

beanbaguk
Thanks but I think I'll stick to a Philips Hue switch which probably has bags more functionality and costs €16 on Amazon.....

I see this flopping.

ETA: I used to love Elgato Eve products. I have a number of them throughout my home, but lost faith in their longevity. It's almost like they are designed to fail after the warranty expires.

I had the original Eve Weather. That died, 1 year and 11 months after I purchased it. I live in Europe and after a lengthy debate regarding EU law, they eventually conceded and gave me a new unit. The barometer on that one died one year and 10 months after getting it. They are yet again refusing to replace the unit (as they said the new one is not under the same 2 year warranty we get under EU law), so once again I'm battling it out with them.

Ultimately, the product quality is pretty crappy and I'm reluctant to buy more of their products, which is a shame as when they work, they are excellent.
Score: 4 Votes (Like | Disagree)

JKAussieSkater
I've never heard of "Thread" before; shouldn't emerging technologies and terminologies be defined within the news article itself?

I guess I'm off to search the web for an answer now ?

this is a good start but....dang that seems a touch pricey for a switch...guess I am good with my single bluetooth switch and manual switches for now...let the market prices drop (hopefully)
Score: 3 Votes (Like | Disagree)

Kabeyun
You know you're in Europe when switches are square and doorknobs are in the middle. Not worse or better. Just different.
Score: 2 Votes (Like | Disagree)
Read All Comments

Thursday July 8, 2021 12:20 am PDT by Tim Hardwick
Since this article was published, Nanoleaf reached out to MacRumors to explain that the information was incorrectly shared early in Europe, and that Thread Border Router support will be in fact be rolled out next month. Nanoleaf, the company that makes wall-mounted modular light panels in various shapes, today rolled out Thread border router support for its Shapes and Elements light...
Read Full Article • 15 comments

Sunday March 20, 2022 6:36 am PDT by Hartley Charlton
Some fifth-generation iPad Air users are complaining about a purported downgrade in build quality, according to posts on social media. The complaints claim that the iPad Air has a noticeably thinner aluminum enclosure, resulting in creaking, a hollow sensation in the hand, and light pressure on the back of the device warping the display. A thread on Reddit (via iMore) contains a large number ...
Read Full Article • 414 comments