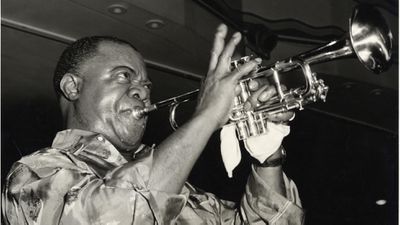 Apple says the film will offer a definitive look at the "master musician's life and legacy as a founding father of jazz" who was "often mischaracterized for not doing enough to support the civil rights movement." In reality, Apple says his "fight for social justice was fueled by his celebrity and his willingness to break his silence on issues of segregation and patriotism."

With the full support of the Louis Armstrong Educational Foundation, Apple says the filmmakers have access to "a treasure trove of never-before-seen archival materials, including hundreds of hours of audio recordings, film footage, photographs, personal diaries and a life's worth of ephemera for exclusive use in the first significant documentary dedicated entirely to his life." A release date has yet to be announced.

Meanwhile, Vanity Fair has a first look at Stephen King's upcoming Apple TV+ series "Lisey's Story" ahead of its June 4 debut. The show, based on his 2006 novel, stars Julianne Moore as the widow of a world-famous author (played by Clive Owen), who "discovered a passageway into a parallel dimension that helped him tap uncanny creative energies."

Update: Apple TV+ has also picked up "Watch the Sound with Mark Ronson," a six-part docuseries that examines sound creation and revolutionary technology used to shape music, according to Deadline.

Apple has since shared more details about this docuseries in a press release:

Each episode of "Watch the Sound with Mark Ronson" will follow Ronson as he uncovers the untold stories behind music creation and the lengths producers and creators are willing to go to find the perfect sound. Ronson explores music's intersection with artistry and technology in candid conversations with music legends and icons including Paul McCartney, Questlove, King Princess, Dave Grohl, Ad-Rock and Mike D from the Beastie Boys, Charli XCX and more, where he discovers the ways in which these unique tools have influenced their work.

"Watch the Sound with Mark Ronson" will debut on Apple TV+ on Friday, July 30.

Razorpit
Finally, a music documentary on a true musician.
Score: 9 Votes (Like | Disagree)

Thunderstrike76
One area of Apple TV+ that I hope they make a big push into is music documentaries. It should be a staple part of the service. Apple and iTunes is apart of music history and has a unique connection to artist and music. I’d love to see them tell the stories of artist, how we’ve connected with music throughout our history and the revolution that was iTunes and iPod.
Score: 4 Votes (Like | Disagree)

yegon
Louis Armstrong will be celebrated and played 100 years from now....

Intuit what you wish from the ellipsis ?
Score: 3 Votes (Like | Disagree)
Read All Comments

'The Me You Can't See: A Path Forward' Town Hall Conversation Coming to Apple TV+

'Who Are You, Charlie Brown?' Coming to Apple TV+ on June 25

Thursday April 22, 2021 7:02 am PDT by Juli Clover
Apple today shared a trailer for the whale documentary "Fathom" on YouTube ahead of its worldwide debut on Apple TV+ on June 25. See our original coverage below for more details about the film. Apple earlier this month announced that it purchased the rights to "Fathom," a documentary that follows two scientists as they attempt to communicate with humpback whales and unravel the mystery of...
Read Full Article • 42 comments