As many as 68 percent of iPhone users are expected to deny advertisers permission to track them thanks to Apple's App Tracking Transparency feature, in what is beginning to look like a significant blow to the advertising industry (via AdWeek). 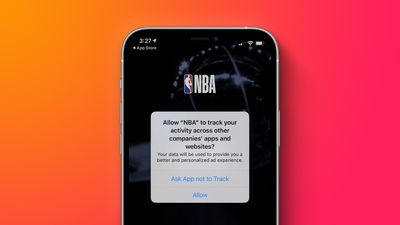 With the launch of iOS 14.5, apps will have to receive explicit user permission before accessing an ‌iPhone‌'s advertising identifier or IDFA, which is used to track usage across apps and websites for ad targeting purposes.

Chief analytics officer at marketing company Epsilon, Loch Rose, said "nobody really knows for sure" what will happen once Apple's tracking prompts become widespread, but the cost per mille of in-app ads, which is the cost an advertiser pays for one thousand views or impressions, is expected to drop by as much as 50 percent.

The initial outlook for the number of users giving consent to track looks bleak, with a median opt-in rate of just 32 percent, according to an analysis of 300 apps across 2,000 devices from AppsFlyer, a mobile marketing and attribution company.

The analysis found that apps with higher consumer affinity saw higher opt-in rates, hovering around 40 percent, but some companies such as dating app Bumble are expecting as few as 20 percent of users to opt-in at most, with its lowest opt-in forecast being for less than one percent of users.

Major digital ad company Trade Desk said that 10 percent of the 12 million ad opportunities per second on its platform are tied directly to IDFA metrics.

There is concern in the advertising industry that widespread opt-outs would lead to the complete deprecation of IDFAs, making ad targeting and performance information almost impossible on Apple platforms, since a key piece of data for advertising would essentially be removed and a certain number of users will no longer be targetable at all.

If opt-out rates are high and IDFAs become scarce, app developers and publishers are expecting revenues to be hit in the short term. Advertisers are also aware that opt-in rates may not be consistent when the feature is widely adopted, which may exacerbate the level of uncertainty and lead to inconsistent data.

Approximately 58 percent of advertisers are reportedly planning to move their businesses out of Apple's ecosystem and invest in other areas like Android devices or connected TV as a result of the change.

DoctorTech
100% I am opting out of all app tracking the minute I get 14.5 installed on my devices
Score: 55 Votes (Like | Disagree)

100% I am opting out of all app tracking the minute I get 14.5 installed on my devices

Koni17
Only 68% ? The only surprising thing from this article is that it's not much higher...
Score: 18 Votes (Like | Disagree)

So... there will be more (and worse) advertising in general because consumers disabling tracking makes the ads less effective.

Don't worry, you can still opt in to being tracked. I guess after seeing people take to the streets to demand their rights to die of Covid, nothing should surprise me.
Score: 17 Votes (Like | Disagree)

Fozziebear71
With the US's current rabid, woke society, I opt out of anything I can. Shut down every social media account and certainly won't be allowing any company, corporation, app, or anything else track me for anything. Hell, I've gotten in the habit lately of turning off location services and putting my iPhone in airplane mode anytime I leave my house.
Score: 16 Votes (Like | Disagree)
Read All Comments