Apple Music TV Expands to the UK and Canada

Following its launch in October last year, Apple Music TV has today expanded to the UK and Canada (via 9to5Mac). 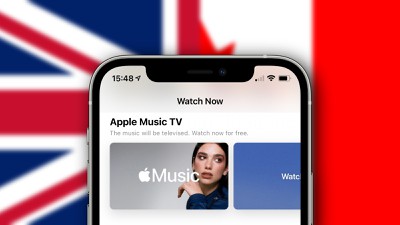 The feature was initially only available in the United States, but Apple is now beginning to roll the service out internationally, starting with the UK and Canada.

Apple appears to be celebrating the launch of ‌Apple Music‌ TV in the UK by featuring songs from British artists such as Dua Lipa, Stormzy, Ed Sheeran, Sam Smith, and Little Mix.

anthogag
Is it just the one stream of current zombie music from Bieber, Lipa, Gaga, Drake, Grande, etc..

What about other genres? I can listen to popular music but I need other types thrown into the mix
Score: 11 Votes (Like | Disagree)

dannyyankou
The music selections aren’t for me, but I like what Apple’s doing here. It’s like what MTV used to be.

I wish they would have different channels for different genres, it seems like a no brainer
Score: 9 Votes (Like | Disagree)

Duncan-UK
Seeing those artists mentioned in the article is enough to make me want to renounce my nationality...
Score: 9 Votes (Like | Disagree)

Expos of 1969
Funny how Cook is so conservative in some ways and bans certain apps but highlights very crude lyrics from no talents like Megan Thee Stallion and Cardi B. Now he will be trying to not only entice us to listen to them but look at them as well :oops: :cool:
Score: 7 Votes (Like | Disagree)
Read All Comments

Monday October 19, 2020 6:18 am PDT by Mitchel Broussard
Apple today unveiled "Apple Music TV," a constant live stream of currently popular music videos, live shows, and events that will run for 24 hours every day (via Variety). Users in the United States will be able to watch Apple Music TV in the Apple Music app as well as in the Apple TV app. In the TV app, you can scroll down a bit to find Apple Music TV highlighted today, and it's at the top...
Read Full Article • 74 comments