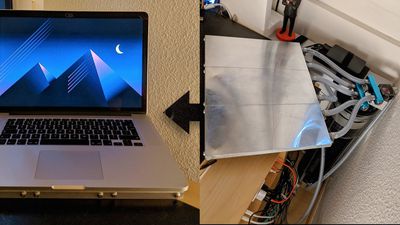 MacRumors forums member "theodric" explained that the noise of their MacBook Pro's fans had become disruptive during conference calls, so amid ordering an M1 MacBook Air, they decided to fit a water cooling system to their machine.

theodric used inexpensive parts such as Bitcoin ASIC miner blocks from AliExpress, an Aquastream XT Ultra water pump, and a Zalman radiator and reservoir from 2005 to create the system.

High-transmissivity thermal pads were added between the case shell and various motherboard components to conduct heat away from the MacBook Pro and into the water cooling system. The thermal shielding from the bottom of the case was also removed, as well as the feet, to ensure full contact with the new cooling plates. The pump, which requires Windows software to operate, was run via a virtual machine, and a Raspberry Pi was used for monitoring.

theodric says that they have "hardly heard the fan since I started using it" and have seen benchmark scores significantly improve under the system. See theodric's full post for more information about the ambitious project.

Although water-cooling a Mac makes for a challenging project, with the advent of Apple silicon chips, which are able to run much cooler than Intel chips, it is very unlikely that we will ever see an official Mac with water-cooling in the future. Nevertheless, there are still cooling upgrades slated to come to the Mac, with the next model due a thermal upgrade seemingly being the new 14-inch MacBook Pro.

MacRumors forums member "theodric" explained ('https://forums.macrumors.com/threads/so-i-water-cooled-my-macbook-pro.2290339/') that the noise of their MacBook Pro's fans had become disruptive during conference calls, so amid ordering an M1 MacBook Air, they decided to fit a water cooling system to their machine.

The fan noise never really bothered me; it was the mid-work flights that were irritating.

Eventually, the battery dies, and the thing comes back down.

madmin
Nice idea, but not enough to wet my appetite for Intel chips
Score: 20 Votes (Like | Disagree)

zackkitzmiller
There's a whole lot of people in here saying, "This is so much work,' "Just buy an M1", "blah blah if Apple", "This is what we have to resort to."

Ya know-- A lot of us do this stuff for fun because it's fun. I definitely don't _need_ the 10 node Raspberry Pi Kubernetes cluster that sits on my desk. I didn't need to spend a thousand bucks and various pi and pi parts. I definitely could have gotten a $5/month DO droplet to host my website. But this was fun. Hobbyists are a thing.

Although water-cooling a Mac makes for a challenging project, with the advent of Apple silicon chips, which are able to run much cooler than Intel chips, it is very unlikely that we will ever see an official Mac with water-cooling.

Some Powermac G5's were liquid/water-cooled. So we have seen it in the past.
Score: 15 Votes (Like | Disagree)

The results of Apple's obsession with thinner. None of this would have been necessary if they made it a few mm thicker and had proper cooling. Form over function. Meh. I'm waiting on a thicker MacBook with ports.

Apple solved this problem by designing energy efficient CPUs. A few mm won't save you if the cpu is running at 300watts.
Score: 13 Votes (Like | Disagree)

Euroamerican
I like it. Shows initiative and getting the job done!
Score: 10 Votes (Like | Disagree)
Read All Comments