Arizona's proposed state bill "HB2005", that would provide developers with an alternative to Google and Apple's in-app purchase options by allowing developers to use their own payment solutions within apps, appears to have been abandoned after intense lobbying (via The Verge). 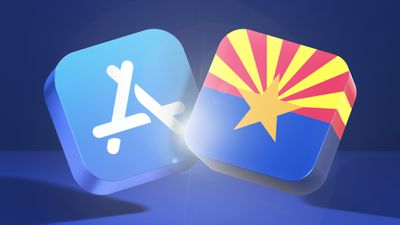 The bill was advanced through the Arizona House Committee and the Arizona House of Representatives, before it was set to be voted upon by the state Senate. The Senate chose to pull the bill "at the last minute" after a sudden loss of support.

Arizona is due to conclude its congressional session next month with no plans to hear HB2005 again. The bill's sponsors told The Verge that "its fate is effectively sealed for the rest of the year."

The primary goal of the bill was to allow developers to bypass Apple and Google's 30 percent commission on in-app purchases, while pushing Apple to allow entire alternative app stores on iOS and making it illegal for big tech companies to act against developers for attempting to bypass app store policies.

Apple has described such legislation as having the potential to "destroy the iPhone as you know it" by opening it up to security risks and undermining the revenue that supports the App Store's infrastructure.

Last month, Apple successfully fought back against a similar bill in North Dakota, which would have paved the way for third-party app store options.

Like the North Dakota bill, the Arizona bill was backed by the Coalition for App Fairness, a group that includes companies like Epic Games, Spotify, Basecamp, and Tile, all of which have had significant issues with Apple's ‌‌App Store‌‌ rules. There is currently a similar bill in Minnesota that Apple is also battling against.

Congressional members in Arizona have now said that lobbying from big tech companies had a significant effect on the bill's chances of success immediately before it went up for a vote.

State Representative Regina Cobb claims that Apple and Google "hired almost every lobbyist in town," which caused Senate members who had previously agreed to support the bill to hesitate. "We thought we had the votes before we went to the committee yesterday, and then we heard that the votes weren't there and they weren't going to take the time to put it up," she explained. Commerce Committee Chair J.D. Mesnard similarly told The American Prospect:

I polled the committee members and there just wasn't enough support for it. A number of members were conflicted on it, others were just opposed. There was some support for it, but it definitely was coming up short.

The Coalition for App Fairness has said that it will continue the fight in spite of the two defeats of meaningful legislation that would change Apple and Google's control over their platforms.

jav6454
In all honesty, yes the App Store is a lucrative business, but it has served as a good portal.

Assuming I were ever given the choice between the App Store or XYZ-store, I'd pick Apple's App Store. I value my privacy, and tight control. Yes, there is a chance devs have to fork over a 15% or 30% commission, but nothing is free. Developer tools require an input.

cdarlington1
I can’t wait for the day that I can go to Best Buy and use a computer station or cash register set up in the store (by Sony) to buy a Sony Product being sold by Best Buy but bypassing the markup Best Buy have on the product. It’s gonna be great. SMH.
Score: 16 Votes (Like | Disagree)

America has the best politicians money can buy.

Personally. I think Apple has a complete right to run the only App Store. partly because of Security but mostly because they invented the hardware and software.

It's like someone demanding to be allowed open up a market stall inside of a Mall for free.

30% is nothing ( actually 15% now for smaller devs ) when I was doing development in the old CD/DVD I'd be lucky to take home 30% after all the Marketing, DVD Printing, Postage, storage. third party cuts ( which were 30-40% alone)
Score: 13 Votes (Like | Disagree)
Read All Comments