Uber appears to be working on an augmented reality walking directions feature designed to help Uber users find the appropriate vehicle and driver in a crowded area. Mentions of augmented reality function were discovered in the Uber iOS app code by MacRumors contributor Steve Moser. 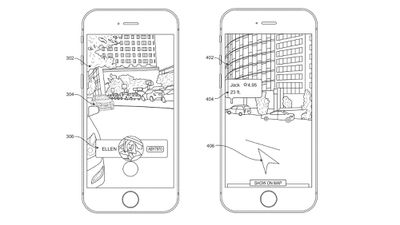 From Uber's augmented reality assisted pickup patent
"Tap to enter AR walking experience," reads the code, which also includes these snippets that give hints on how the AR directions work:

Uber in 2018 patented an augmented reality assisted pickup feature that matches a rider with an available driver and helps them meet up through an augmented reality control module that directs the passenger through the camera app, and it appears the feature could soon be on its way to being deployed.

Uber patented using Augment Reality to help users identify drivers in 2019 and now it looks like they are working on it in their app. “Tap to enter AR walking experience” Cc @JaceDeloney https://t.co/hH3MV8tBOx pic.twitter.com/zbukkVjjOl — Steve Moser (@SteveMoser) March 30, 2021

There is no word on when Uber's augmented reality assisted walking feature might debut, and the company has made no formal announcement at this time. Other apps like Google Maps also offer augmented reality walking directions that overlay directional arrows on the real-world view seen through the camera.
Tags: Uber, Augmented Reality
[ 33 comments ]

mansplains
At least someone's thinking of how to put the LiDAR sensors to use... With how much Apple pushes AR (and pushed VR dev with iMac Pro, RIP) and rolled out LiDAR, the relevant apps are still in their infancy.
Score: 8 Votes (Like | Disagree)

When the car goes somewhere not even close to the location I gave then sits there waiting.

One time, I made the mistake of ordering one near a 6-way intersection in SF. I thought standing somewhat down the street would've helped, but no. Driver stopped on the opposite side of the intersection and put on blinkers. When I finally realized and jay-ran across three red lights, he gave up and started driving away. AND marked me as being in the car. I chased the car down a crowded street, and eventually the jerk let me in.

This absolutely. I had a similar experience when I was a teenager, alone, anxious and lost in San Francisco trying to get to a festival.

It was absolute panic and sensory overload trying to find my Uber in the busy street among hundreds of similar cars. Juggling between the driver screaming at me over the phone in a thick accent and trying to find him on the GPS. Darted three blocks trying to find him before he hung up and cancelled the ride. In the process of wandering around to find a calmer spot to try again, I'd somehow gotten myself into a notoriously dangerous district. I only found out where I was when the next driver was concerned as to what a lone teenager was doing there.

I don't know how this feature would play out real-world, but if it works, it could save others from going through what I did. Situations like that also taught me the value of a small/one-handed phone, so I could hold mace in my offhand..
Score: 5 Votes (Like | Disagree)

cwosigns
FINALLY a use case scenario for LiDAR that seems useful.
Score: 2 Votes (Like | Disagree)

When the car goes somewhere not even close to the location I gave then sits there waiting.

One time, I made the mistake of ordering one near a 6-way intersection in SF. I thought standing somewhat down the street would've helped, but no. Driver stopped on the opposite side of the intersection and put on blinkers. When I finally realized and jay-ran across three red lights, he gave up and started driving away. AND marked me as being in the car. I chased the car down a crowded street, and eventually the jerk (well, I guess not a total jerk) let me in.
Score: 2 Votes (Like | Disagree)

sentiblue
I work from home for more than a decade now. I use Uber/Lyft on a regular basis simply because my rides are always short and I get to ditch my car, which gets rid of payment/insurance/gas costs.

After using it for so long I kind of don't understand why they don't make their app to work with AppleCar and Android Auto. There's a lot of drivers with these options in their cars. The drivers always have to mount their phone on the dashboard and interact with the phone.
Score: 1 Votes (Like | Disagree)
Read All Comments

Tuesday November 2, 2021 3:04 pm PDT by Juli Clover
Niantic has experienced major success with augmented reality game Pokémon Go, a title that still has a loyal fanbase, but unfortunately, its Harry Potter-themed game has not fared as well. Harry Potter: Wizards Unite is going to be shut down on January 31, 2022 as a result. First introduced in June 2019, Harry Potter: Wizards Unite allows players to join the Statute of Secrecy Task Force to...
Read Full Article • 51 comments

Friday May 14, 2021 11:04 am PDT by Sami Fathi
The iconic and industry-classic rivalry between Apple and Microsoft, which has arguably seen a slowdown in recent years, is poised to begin heating up as both companies target the future of augmented reality and renewed competition in the PC industry, according to an analysis from Bloomberg's Mark Gurman. Both Apple and Microsoft have strong ambitions for the future of augmented reality....
Read Full Article • 66 comments

Monday January 10, 2022 11:40 am PST by Juli Clover
Uber appears to have silently ended support for its Apple Watch app last month, and multiple Uber users have noticed that they are no longer able to hail a ride from their wrists. Curiously, Uber has not removed the Uber Apple Watch app from the App Store. The app is still able to be downloaded and installed on an Apple Watch, but opening it up reveals a poorly-worded message about dropped...
Read Full Article • 90 comments

Tuesday October 12, 2021 9:57 am PDT by Juli Clover
Apple just announced its second fall event, which is set to take place on Monday, October 18. As usual, the Apple Events webpage features an augmented reality logo that you can see when viewing the page on an iOS device. Open up the Apple Events page on an iPhone or an iPad and then tap on the logo to open the augmented reality interface. Apple asks you to scan around the room and then...
Read Full Article • 34 comments

Thursday September 29, 2022 12:38 pm PDT by Juli Clover
Tony Blevins, Apple's vice president of procurement, is set to depart the company after he made a crude comment about his profession in a recent TikTok video, reports Bloomberg. Blevins was in a video by TikTok creator Daniel Mac, who was doing a series on the jobs of people he spotted with expensive cars. After seeing Blevins in an expensive Mercedes-Benz SLR McLaren, Mac asked Blevins what ...
Read Full Article • 647 comments