The App Store and Mac App Store are currently experiencing an outage, according to Apple's System Status page. Apple says that ‌App Store‌ services could be slow or unavailable for some users, with the problem starting at 10:05 a.m. Pacific Time. 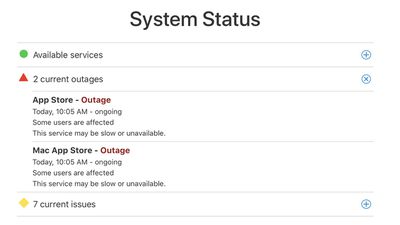 Other services like iCloud Drive, iCloud Mail, and iMessage are also listed as experiencing issues, with some users unable to access Apple's services.

Curiously, though Apple is reporting several outages, there are few complaints on Twitter and other social networks about problems with the ‌App Store‌, iMessage, and Mail.

Update: According to Apple's System Status page, all of the outages have now been addressed and services should be up and running.

10 minutes ago all I was getting was the spinning wheel. I am glad the story is here. Otherwise, I wouldn't have known there was a problem.

Of all the things to complain about on the forum, you pick something very benign that has no affect on you. There was no need to do that.
Score: 4 Votes (Like | Disagree)

It’s good to have these stories on the record, it lets you know it was an issue on Apple’s end and not the user.
Score: 3 Votes (Like | Disagree)

Tehcinal status reports shouldn't be in the main "rumors" feed. And really, why is a third party rumors forum where you woulds look for reports on technical issues, anyway? Apple should have a status page for their own services.

Unless I'm mistaken/dense, Apple doesn't make it particularly clear to its users the status of their cloud-based services. I happened upon the web page earlier today when troubleshooting problems I was having and an internet search turned up an older non-Apple.com website which linked to it. So if/when Apple gets their act together and makes it super-obvious for end-users to know/see the status of their cloud-based services, then I think it's *very* helpful for 3rd party websites, like Macrumors, to post this as news.

Also, even if the issue had been *completely* resolved by the time that Macrumors heard about it and had their post ready to publish, I think it would *still* be worth them posting about, because it helps to keep Apple accountable for this. For a lot of Apple device users an occasional outage for a few hours might be no big deal. But for some, iCloud being extremely reliable and up-to-date can be extremely important. And, at the very least, even average users would benefit from knowing if, for example, Google's cloud-based services have 99.whatever% uptime while Apple's iCloud might only be 95% uptime.

Apple has the resources to do this right. In recent years, they've been quite sloppy/lazy with some of their offerings while still charging premium prices as if they're the gold standard on everything they do.
Score: 2 Votes (Like | Disagree)

TheYayAreaLiving ?
Hoping for an easy fix soon. Thank you for the heads up Apple.
Score: 2 Votes (Like | Disagree)

Hope that this is something mundane like an upgrade gone bad. Not a security breach or denial or service attack.

An upgrade gone bad is anything but mundane. I'd rather a DDoS attack over that, personally.
Score: 2 Votes (Like | Disagree)
Read All Comments