Apple today provided updated figures on the diversity of its workforce over the last two years, indicating that its promise to be more inclusive has resulted in a steady increase in representation amongst its employees. 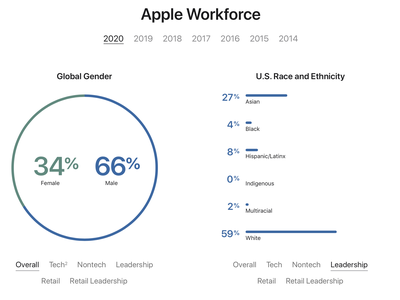 The last time Apple provided figures on its workforce was in 2018, so this is the first time since than that the company has provided a breakdown of the different races, ethnicities, and genders within its workforce. Apple breaks down diversity into separate sectors of the company, including Leadership, Retail, and Retail Leadership.

Overall, Apple says that since 2018, it has increased the share of Asian employees by four percentage points, while other races and ethnicities also saw increased representation in multiple categories. Over the last two years, Apple says that 42% of new retail hires have been women, and women have filled 49% of retail leadership positions since January of last year.

Apple says that members of underrepresented communities occupy more than 60% of current Apple Store jobs and 50% of retail leadership positions. Alongside the updated numbers, Apple today redesigned its Inclusion and Diversity webpage, featuring new testimonials from employees, and further highlights its commitment to be equitable and diverse.

Wednesday December 15, 2021 2:01 pm PST by Juli Clover
Apple employees are no longer going to be returning to corporate offices in February as planned due to the continued spread of COVID-19 and the newly emerging omicron variant, Apple CEO Tim Cook said in a memo sent out today. Back in November, Apple sent out a letter telling employees that Apple would expect them to start returning to the office on February 1, but that return date has now...
Read Full Article • 41 comments

Thursday July 1, 2021 12:46 pm PDT by Juli Clover
Apple is developing a hybrid work model for its retail employees that would sometimes allow them to work from home, reports Bloomberg. It may sound unusual for a retail employee to work from home, but in this case, it means that workers would be able to take on at-home support shifts in addition to their in-store shifts. A "Retail Flex" pilot program is set to debut, which will see...
Read Full Article • 55 comments

Friday August 27, 2021 12:52 pm PDT by Juli Clover
Apple is further pushing its employees in the United States to get vaccinated now that the Food and Drug Administration has officially approved the Pfizer COVID-19 vaccine, reports Bloomberg. Apple has launched a new internal web page, sent out an employee memo, and is holding internal talks as part of its vaccination campaign."Apple is asking everyone who has access to the vaccine and is...
Read Full Article • 432 comments

Wednesday September 22, 2021 1:14 pm PDT by Juli Clover
Apple is planning to give its Apple Store employees one-time bonuses amounting to up to $1,000, reports Bloomberg. The bonuses will be provided to employees who have been working during the ongoing global health crisis. Retail employees who were hired before March 31, 2021 will be given $1,000, and employees who joined after that date will be given $500. Employees hired for the holiday...
Read Full Article • 171 comments