In 2019, Apple partnered with the Harvard T.H. Chan School of Public Health and the NIH's National Institute of Environmental Health Sciences to launch a Women's Health Study through its Research app on the iPhone and Apple Watch. 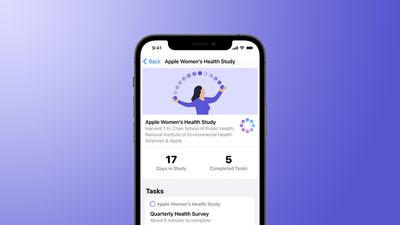 Apple today highlighted preliminary data from the study, offering insights on women and their menstrual symptoms. Among the first 10,000 participants to enroll in the study and respond to a demographics survey, the most frequently tracked symptoms were abdominal cramps, bloating, and tiredness, all of which were experienced by more than 60 percent of participants who logged symptoms, according to Apple's press release.

More than half of the participants who logged symptoms reported acne and headaches, based on the preliminary findings. Some less widely recognized symptoms, like diarrhea and sleep changes, were tracked by 37 percent of participants logging symptoms.

Apple said the preliminary data from the Women's Health Study "highlights how large-scale, longitudinal research on menstruation can help advance the science around women's health and destigmatize menstruation."

"These findings take us a step further in validating and destigmatizing period symptoms," said Dr. Sumbul Desai, Apple's vice president of Health. "Harvard Chan researchers are leaders in the field on this critically important subject, and we couldn't be more proud to support and help scale their efforts through the Research app."

Apple said the Women's Health Study aims to advance the understanding of menstrual cycles and how they relate to various health conditions, such as polycystic ovary syndrome (PCOS), infertility, and menopausal transition. Participants must be at least 18 years old (at least 19 years old in Alabama and Nebraska and at least 21 years old in Puerto Rico) and have menstruated at least once in their life.

What, exactly, is the “Stigma“ around a period

Please explain how a study that "aims to advance the understanding of menstrual cycles and how they relate to various health conditions" is related to insanity and/or the "left".

Next we should de-stigimitize that everyone poops perhaps. Except to a broader demographic of people of all ages, not just children, because some of us are pedantic children no matter how old we get and despite new information and life experiences! weeee

Anything that's remotely a joke is "stigma" in the West. Literally nobody in the world cares. They know it's natural and it happens and it's okay to joke about it. America has a penchant for the dramatics as usual.

Or, it's a legitimate issue. Being dismissive helps no one.

I found these articles interesting, in case you're actually interested in finding out what this is truly about:

For example, in Venezuela, many women are forced to sleep in huts for the duration of their menstruation. In rural Ghana, menstruating women are forbidden from entering a house with a man or cooking food. Many young women don’t have access to any type of sanitary pad, which can cause them to miss school and cause them to be 70% more likely to have reproductive tract infections ('http://soothehealthcare.com/wp-content/uploads/pdfs/Cervical-Cancer-Research-by-Ms-Divya-Ramaswamy.pdf').

In addition, in Kenya, studies have shown that girls will miss an average of four days of school each month — adding up to about 20% of the school year. Women face discrimination, harassment, and are looked down upon because of menstruation, as it is seen as a form of weakness rather than a necessary biological function.

Full article was posted earlier in the thread.

Good thing Apple is actively educating people about this issue. From the posts I see in this thread, the awareness level about this is very low.
Score: 9 Votes (Like | Disagree)

Darth Tulhu
I was not aware menstrual cycles needed destigmatization!

As a husband of 23 years and a girl's father, this is good news and I'm glad Apple is taking an interest in women's (and actually, everyone's) health.
Score: 8 Votes (Like | Disagree)

I was not aware menstrual cycles needed destigmatization!

As a husband of 23 years and a girl's father, this is good news and I'm glad Apple is taking an interest in women's (and actually, everyone's) health.

Anything that's remotely a joke is "stigma" in the West. Literally nobody in the world cares. They know it's natural and it happens and it's okay to joke about it. America has a penchant for the dramatics as usual.
Score: 7 Votes (Like | Disagree)
Read All Comments

Tuesday June 15, 2021 12:45 pm PDT by Juli Clover
The Mayo Clinic today debuted support for the Apple Health records feature available on the iPhone, allowing Mayo Clinic patients to add their medical records to the Health app. Health Records is a feature that's designed to allow patients to view and aggregate all of their health data in one easy-to-access spot on the iPhone. More than 700 institutions and 12,000 care locations now offer...
Read Full Article • 31 comments

Wednesday June 16, 2021 2:38 am PDT by Sami Fathi
In 2016, Apple considered an "audacious" plan to launch its own healthcare service, based on a subscription, with "Apple doctors" at clinics for customers, according to The Wall Street Journal. The project, which has since stalled due to internal concerns, was to offer customers an all-encompassing healthcare service that would integrate data collected from the iPhone and Apple Watch. On the ...
Read Full Article • 90 comments