Should You Buy a Super Cheap Refurbished iPhone From Amazon?

Amazon maintains lists of its best selling products, and right now, the best-selling smartphone that's available from Amazon is an Amazon "Renewed" iPhone 8, which is priced starting at $178.

Subscribe to the MacRumors YouTube channel for more videos.
That's super cheap for an ‌iPhone‌, and cheaper than Apple's own refurbished price for the same device, so in our latest YouTube video, we picked up one of these Amazon Renewed iPhones to see if it's worth the savings.

Amazon's "Renewed" devices are all pre-owned and are not Apple certified, but Amazon says they've been professionally "inspected, tested, and cleaned" by Amazon-qualified suppliers. Note that the iPhones come from various third-party suppliers and are not necessarily provided direct by Amazon. 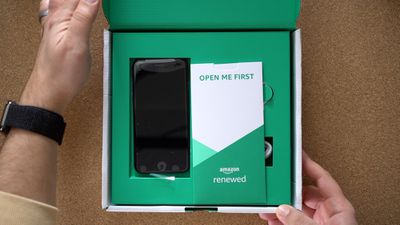 Amazon says that its Renewed devices have no "visible cosmetic imperfections" when held at an arm's length and a battery capacity that exceeds 80 percent relative to a new device, while Renewed Premium versions are "certified to work and look like new," so we chose the Premium option to get as close as possible to new ‌iPhone‌ 8.

The ‌iPhone‌ 8 that we received from Amazon looks and feels like a new device, but it did ship with a non-factory charger and Lightning cable. There were a few hairline scratches on the screen that weren't super noticeable, but will likely annoy perfectionists.

After charging, the ‌iPhone‌ 8 worked as expected and had a 90 percent battery capacity. Over the course of a few days of usage, we ran into an issue with the speaker. At loud volumes, it sounds off with a noticeable crackling, which was not a problem with an original launch day ‌iPhone‌ 8 that we had on hand. The speaker issue did not impact call quality, so the phone was functional even with this problem.

If you're looking for an ‌iPhone‌ on the cheap, Amazon's Renewed devices are worth checking out, but don't expect total perfection. We ran into some minor problems, and if you check out the Amazon reviews, other users have also had more significant issues with the used and refurbished iPhones that they've purchased from Amazon.

Amazon offers a 90-day return policy for Renewed devices, while "Premium" versions come with a one-year customer satisfaction guarantee with an option to return the product, so if something is wrong with a device, you can send it back and get a refund.

aesc80
Let's be honest, y'all - this ain't for us. This is for those people who have parents / siblings / hermits who don't care about certain features and just want a working device for FaceTime, iMessage, or whatever sort of communication (including phone calling). I'd personally buy this for my dad who would rock a Samsung Galaxy S < 7. As long as it works, that's all that matters to him.

Us though - we're the class of uppity kids driving year release BMWs and Mercs, laughing at the kid driving the used B6 Audi A4. I know that makes us sound terrible, but look at the iPhone 12 in your hands. Yeah - you wouldn't have it any other way! ? ? (jokes, of course!)
Score: 16 Votes (Like | Disagree)

alpi123
Why is Apple's own refurb store so limited in terms of choice and stock?
Score: 10 Votes (Like | Disagree)

Renewed Premium versions are "certified to work and look like new,"

There were a few hairline scratches on the screen that weren't super noticeable, but will likely annoy perfectionists.

inigou
A used battery and scratched display is not an option for me. Even being cheap.
Score: 10 Votes (Like | Disagree)

Nothing should be bought on Am**on. Stop advertising it. It's one of the cancer of this society.

That is an absurd statement, in my opinion. There is absolutely nothing wrong with buying needed products on Amazon, especially during a pandemic.
Score: 9 Votes (Like | Disagree)

posguy99
So the difference between these two levels of "renewed" would be that the Renewed Premium they wipe with a damp rag vs a dry one before chucking it in a box?
Score: 8 Votes (Like | Disagree)
Read All Comments

Monday November 15, 2021 9:05 am PST by Juli Clover
Amazon today introduced a native macOS app for its Amazon Prime Video service, with the app now available from the Mac App Store. Prime Video subscribers can stream content using the new app, or download content on Macs for offline viewing. All Amazon Prime content is available through the Mac app. Picture-in-Picture and AirPlay are both supported features that work with Amazon's new app, ...
Read Full Article • 104 comments

Tuesday January 25, 2022 11:13 am PST by Juli Clover
Back in October, Apple agreed to pay $95 million to settle an ongoing class action lawsuit that accused the company of violating various U.S. laws and regulations by providing customers with refurbished replacement devices instead of new devices when repairs were required under AppleCare. Administrators handling the case have now updated the "Replacement Device Lawsuit" website with details...
Read Full Article • 85 comments