NASA's Perseverance rover, which recently made history landing on the surface of Mars, is powered by the same processor used in an iMac more than 23 years old. 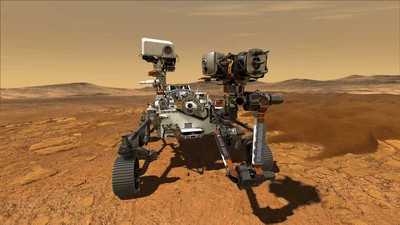 As reported by NewScientist (via Gizmodo), the rover includes the PowerPC 750 processor, the same chip used in the G3 ‌iMac‌ in 1998.

The main chipset is the same; however, there are differences between the version of the processor shipped in a consumer computer and the one exploring space. The processor in the rover is built to withstand temperatures between -67 and 257 degrees Fahrenheit (−55 and 125 degrees Celsius) and comes with an added $200,000 price tag.

The PowerPC 750 processor was ahead of the game for its time, featuring a single-core, 233MHz processor, 6 million transistors (compared to today's 16 billion in a single chip), and based on 32-bit architecture.

Apple used PowerPC chips in Mac computers until it transitioned to Intel in 2005. Right now, Apple's going through a similar change, moving away from Intel to deploy its own custom Apple silicon in Macs.

Why so old processor?

Because super-reliability is more important than compute power. The G3 is also used e.g. as mission computer in fighter jets.
The feature is called fail-safe
Score: 46 Votes (Like | Disagree)

b13o0r12e3
if a more than two decade old processor is good enough to find out evidence of extraterrestrial past life, then I got no excuse to be buying anything that [S]Tosser[/S] Prosser is predicting anytime soon
Score: 35 Votes (Like | Disagree)

ArPe
My M1 with Neural Engine laughs at your PowerPC 750 AltiVec. I will rule Mars.
Score: 27 Votes (Like | Disagree)

Behind closed doors at Apple HQ they are currently working on pricing for the new M1x line.

They stop and wonder for a second if the people are ready for a 6 figure Mac.

wubsylol
It's also radiation hardened, which is where the price tag comes from (and also the most important thing setting it aside from the actual PowerPC 750 found in the iMac G3)
Score: 25 Votes (Like | Disagree)

Tuesday March 23, 2021 3:30 pm PDT by Juli Clover
Apple in November started releasing Macs with Apple-designed M1 chips, and the Apple silicon technology will eventually replace all the Intel chips that Apple has used in its Mac lineup for years. Intel appears to be having a difficult time with Apple's transition. Last week, the company launched an anti-M1 Mac ad campaign starring Justin Long, and now, Intel is pinning its hopes on...
Read Full Article • 306 comments