Target today announced it is building on its long-standing partnership with Apple to include a new "enhanced Apple shopping experience" in its stores across the United States. 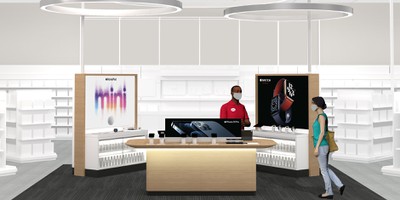 The new in-store shopping experience is meant to offer customers a more convenient experience for shopping Apple products at Target locations. The new experience will be guided by new "Target Tech Consultants," who will receive specialized training directly from Apple. Target's Executive VP and Chief Growth officer says the new shopping model was designed with Target's guests in mind and is meant to elevate the Target-Apple partnership.

Apple products are popular with Target's guests, and this new, dedicated shopping experience offers enhanced service and expanded offerings, building on our strength as a go-to destination for electronics. This new model was created with Target's guests in mind, and we'll continue to learn and enhance the experience through future rollouts later this year.

randolorian
It seems unnecessary to put masks on those fake people.
Score: 14 Votes (Like | Disagree)

iAFC
Apple is reaching near omnipresence. And there are still some dummies calling Tim Cook to resign. (Mostly the same ones who begged for a smaller iPhone, which curiously flopped this year)
Score: 11 Votes (Like | Disagree)

It seems unnecessary to put masks on those fake people.

You're right. They're supposed to have TWO masks now!
Score: 7 Votes (Like | Disagree)

NashMan2
I just wish they'd reopen the actual stores they already have.
Score: 7 Votes (Like | Disagree)

jmgregory1
The demographics have to be a near perfect match between Apple and Target. Definitely helpful for Apple in areas where it would be more difficult to operate their own stores. It’s also a nice perk to get the 5% off when using a Target Red card, which can even be just a linked debit card, and it beats Apple Card‘s 3% cash back.
Score: 5 Votes (Like | Disagree)

Relentless Power
Interesting that Texas will have a total of six destinations, where as California only has one.You’d think Apple would probably have worked with Target to open more locations specifically in California for testing to see how everything rolls out.
Score: 3 Votes (Like | Disagree)
Read All Comments

Wednesday May 5, 2021 8:26 am PDT by Mitchel Broussard
Last week we shared a lowest-ever price on the 40mm GPS Apple Watch Series 6, and this week Target is offering a deal on the 44mm models. You can get the 44mm GPS Apple Watch Series 6 for $379.99, down from $429.00. This is the second-best price we've ever seen for this model, and the current cheapest deal online. Note: MacRumors is an affiliate partner with these vendors. When you click a...
Read Full Article • 0 comments

Wednesday May 5, 2021 1:14 pm PDT by Juli Clover
Astropad's Luna Display accessory that's able to turn an old iPad or Mac into a secondary display for a primary Mac was today updated with a new feature that's designed to allow Mac-to-Mac mode to work over Ethernet and Thunderbolt. The Luna Display is an alternative to Apple's Sidecar, allowing an iPad to be used as a display for a Mac. Unlike Sidecar, it works with other Macs, so you can...
Read Full Article • 56 comments

Thursday April 15, 2021 6:49 am PDT by Mitchel Broussard
Multiple deals on Beats headphones have sprouted up online today, and we're seeing a few solid discounts on Powerbeats Pro, Beats Solo Pro, and Beats Flex. These sales are available from numerous retailers, ranging from Target to Amazon, Best Buy, and Apple itself. Note: MacRumors is an affiliate partner with some of these vendors. When you click a link and make a purchase, we may receive a...
Read Full Article • 19 comments