For the past few days, the 21.5-inch 4K iMac with either 512GB or 1TB of SSD storage configuration has been unavailable for order on Apple's website. Other configurations, such as the lowest-end 256GB SSD option or 1TB Fusion Drive storage option remain available, however. 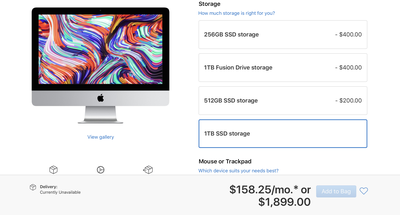 While there are rumors of an updated ‌iMac‌ launching this year, the current lack of availability for the higher-end storage options is likely due to a component shortage rather than a sign of an imminent launch. Both the 512GB and 1TB SSD storage options are popular upgrade items as well, which makes for a significant inconvenience for buyers looking to purchase an ‌iMac‌ right now.

Timing for a launch of the redesigned ‌iMac‌ remains unclear, so we'll have to hold tight to see whether we get an update or Apple's component shortage is resolved for the current models. It's quite rare for Mac configurations to be completely unavailable for ordering, with Apple usually just pushing shipping estimates out significantly in cases of component shortages or stock drawdowns ahead of updates.

jz0309
there is a semiconductor shortage that affects a lot of industries, eg automotive and also gaming consoles ...
so it's a component shortage imho ...
Score: 9 Votes (Like | Disagree)

carrrrrlos
If only one could buy the base model and upgrade the storage themselves.
Score: 9 Votes (Like | Disagree)

LeeTom
I know three people ready to buy iMacs once they move over to Apple Silicon... c'monnnnn Apple do your thing...
Score: 4 Votes (Like | Disagree)

Get a Mac Mini and a screen instead.

well let’s see.
The Mac mini would probably end up being about $1000 once I factor in upgrades and taxes.
then I don’t have an Apple keyboard, or any keyboard at all, so that’s about another 130 bucks.
The magic trackpad is another 130 bucks.
A nice set of speakers is probably another hundred dollars.
A nice Display is probably another thousand dollars or so.
Before you know it, I’m close to $2500, with a messy and complicated set up, with Limited I/O.
webcam is another $100.
Score: 4 Votes (Like | Disagree)

aesc80
Wow ... how to make a cruddy "out of date" computer more "out of date"? Strip it of full blown SSD options with reasonable space. That's how you do it! Might as well donate those other machines to charity.
Score: 2 Votes (Like | Disagree)
Read All Comments

Tuesday March 8, 2022 11:08 am PST by Sami Fathi
Following the launch of the new Mac Studio and Studio Display, Apple has discontinued the 27-inch iMac. The 27-inch iMac had remained in the iMac line alongside the smaller 24-inch iMac with Apple silicon and was one of just a few Macs that still featured an Intel processor. Now with the 27-inch Studio Display that can be connected to any Mac, Apple has seemingly felt there is no need for ...
Read Full Article • 184 comments

Wednesday February 23, 2022 8:38 am PST by Mitchel Broussard
Amazon today expanded its sale on the 24-inch M1 iMac (8-core GPU, 256GB) to include more colors, available for $1,349.99, down from $1,499.00. This sale price won't be seen until you add the iMac to your cart and receive an automatic coupon. Note: MacRumors is an affiliate partner with some of these vendors. When you click a link and make a purchase, we may receive a small payment, which...
Read Full Article • 44 comments