Apple Music subscribers can now listen to their "Replay 2021" playlist as of today. This playlist ranks all of the music you've been listening to on ‌Apple Music‌ from 1 to 100, with your most-streamed songs ranked at the top of the list. 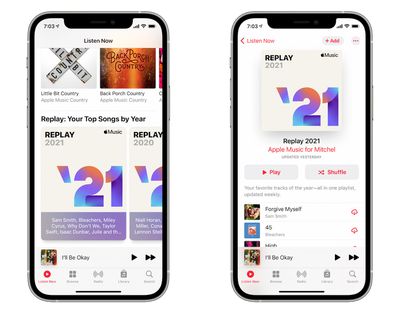 Just like last year's Replay playlist, Replay 2021 will update every week on Sunday, constantly changing as you listen to more songs on ‌Apple Music‌. By the end of the year, you'll have an overall snapshot of the tracks you listened to the most in 2021.

The Replay 2021 playlist can be found at the bottom of the Listen Now tab in ‌Apple Music‌, as well as on Apple Music for the web. If you head to the web version, you'll also get a few more pieces of data like most streamed artists and albums, as well as detailed play counts and hours listened data.

As of now, this secondary information is still reflecting 2020 streaming stats. Apple still hasn't made this information available directly in the ‌Apple Music‌ app.

‌Apple Music‌ Replay is Apple's version of Spotify Wrapped, but there are differences. Spotify Wrapped doesn't track songs throughout the year, but it's far more popular when it's shared in December thanks to easily shareable infographics generated by Spotify based on each user's listening habits.

While ‌Apple Music‌ Replay is available year-round, the playlist doesn't tend to change much once you get far enough into the year, and Apple still hasn't provided a year-end recap that its subscribers can post to social media platforms.

Head to the ‌Apple Music‌ app or Apple Music on the web to add the Replay 2021 playlist to your library.

drinkingtea
Apple needs to include a feature where we can block certain songs from appearing in the playlist. I have way too many little kid songs in that playlist since I play music for my 5-year-old cousins. Please, Apple.
Score: 12 Votes (Like | Disagree)

burgman
Major fail for me is I listen to ambient sleep sounds like white noise rain Etc. Many of tracks are in my Replay list, so its unusable.
Score: 4 Votes (Like | Disagree)

adammusic
No way is this accurate.
My 2019 list has tracks I probably listened to once in there.

but my 2020 & 2021 lists are all absolutely filled with tracks from Max Richters Sleep, bc thats what I use to fall asleep to, so this is useless for me going forward lol
Max Richters Sleep has 204 tracks lol
Score: 4 Votes (Like | Disagree)

Doesn't appear to be available in the UK just yet

It’s showing up for me. Check under the “Listen Now” tab.

-
I don’t know what algorithm it uses but it doesn’t seem to be accurate. I have songs on top 10 that I haven’t listen to more than 3-4 times.
Score: 3 Votes (Like | Disagree)

Apple needs to include a feature where we can block certain songs from appearing in the playlist. I have way too many little kid songs in that playlist since I play music for my 5-year-old cousins. Please, Apple.

Surrrrrrrre. Blame it on your cousin. ?
Score: 3 Votes (Like | Disagree)

XmasRights
Doesn't appear to be available in the UK just yet
Score: 2 Votes (Like | Disagree)
Read All Comments

Apple Debuts 'This Week on Apple Music' With Weekly Highlights

Friday July 9, 2021 10:44 am PDT by Juli Clover
Apple today introduced a new Apple Music feature called This Week on Apple Music, which is designed to provide a break down of the five biggest things happening across Apple Music each week. Apple says that it will provide highlighted stories with album suggestions, playlists, videos, radio episodes, interviews, and more. Today's recommendations include the BTS: Butter Dance Party...
Read Full Article • 19 comments