Nearly three months after the launch of Apple's rave-reviewed M1 Macs, Intel has fired back, but there are some asterisks involved. 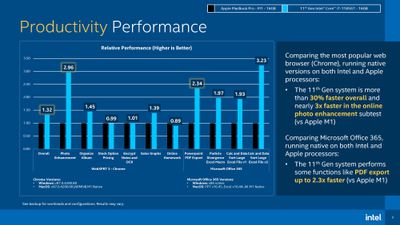 In a slideshow shared by PCWorld this week, Intel highlighted what PCWorld described as "carefully crafted" benchmarks in an attempt to prove that laptops with the latest 11th Generation Core processors are superior to those with Apple's custom-designed M1 chip.

For example, Intel said that exporting a PowerPoint presentation as a PDF file is up to 2.3x faster on a Windows laptop equipped with an 11th Generation Core i7 processor and 16GB of RAM compared to completing the same task on a 13-inch MacBook Pro with the M1 chip and 16GB of RAM, with Intel noting that PowerPoint ran natively on both systems.

Intel also indicated that Topaz Labs' AI-based photo enlargement software Gigapixel AI performed up to 6x faster on the Core i7 system compared to the M1 MacBook Pro. In this case, PCWorld said "the results are pretty real," noting that Topaz Labs' apps are designed to take advantage of the hardware acceleration inside of Intel's processors.

As for gaming performance, the results were mixed, with Intel emphasizing the well-established opinion that Macs are not ideal for gaming and lack support for "countless" games like Gear Tactics, Hitman 2, and others.

Intel also conducted a "real world battery life test" and found that both the M1 MacBook Air and the Acer Swift 5 with an 11th Generation Core i7 processor achieved virtually identical 10-hour battery life when streaming Netflix with additional tabs open. Intel said both notebooks were set to 250 nits display brightness, with the MacBook Air running Safari and the Acer Swift 5 running Chrome for the test.

It's worth noting that Intel switched from the MacBook Pro for the performance benchmarks to the MacBook Air for the battery life test, and Intel used a different Core i7 processor SKU for each of these tests as well.

Intel added that its processors are about not only performance, but also choice, as they power all sorts of devices from traditional notebooks to tablets with features like touchscreens and support for multiple external displays. Officially, the M1-based MacBook Air and 13-inch MacBook Pro only support one external display, but some users discovered that this limitation can be bypassed with DisplayLink adapters as an unofficial solution.

"Inconsistent test platforms, shifting arguments, omitted data, and the not-so-faint whiff of desperation," wrote Snell. "Today's M1 processor is a low-end chip for low-end systems, so Intel only has a small window to compare itself favorably to these systems before higher-end Apple silicon Macs ship and make its job that much harder."

Tom's Hardware's Andrew Freedman also cautioned that all vendor-provided benchmarks should be taken with a grain of salt.

CGJay
After 40 years of developing x86 processors, Intel manage to edge-out Apple's first-generation laptop processor on some cherry-picked benchmarks. They even had to use a different processor to compare battery life. Congratulations, Intel.
Score: 140 Votes (Like | Disagree)

antiprotest
This is bad strategy. Instead of doing this, which invites backlash and reeks of desperation, Intel should say something like they are excited by the competition and promise people that they have great things coming up and that fans won't be disappointed. Something like that.
Score: 117 Votes (Like | Disagree)

andymallins
Where is the fan noise test
Score: 112 Votes (Like | Disagree)

PilotWoo
Complete desperation on Intels part. To get anywhere near the M1 performance in a laptop, the Intel chips will be melting your genitals.
Score: 96 Votes (Like | Disagree)

Neither will fan manufacturers... :p
Score: 58 Votes (Like | Disagree)
Read All Comments