Designer Arun Venkatesan today shared an interesting deep dive into some of the classic watch designs that inspired various watch faces for the Apple Watch, detailing how Apple took design cues from well-known watches from companies like Rolex, Breitling, Heuer, and others. 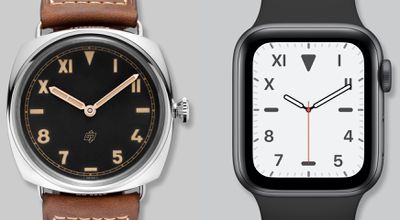 The California watch face, for example, was inspired by a dial design that originated in World War II. The mix of Roman and Arabic numerals was thought to make the watch face more readable in low visibility.

Originally called the "error proof" or "high visibility" dial, it adorned the fronts of "bubble back" Rolexes -- so-called because of the bubble-shaped back that gave the watches a thin appearance. Strikingly, the indices are set both in Roman and Arabic numerals where other watches would stick to one or the other. It's thought that mixing numerals aids both the wearer and his brothers-in-arms in reading the watch in low visibility conditions.

Unlike the previous faces, the name Count Up, refers to a type of bezel, not a dial or complication. Also known as the diving bezel, this rotating bezel, when coupled with the minute hand, helps measure elapsed time in minutes.

The count up bezel can be traced back to a monumental year in the history of the dive watch -- 1953.

Apple's Chronograph watch faces are built on a long history of chronograph watches that date back to the early 1800s and have become some of the most popular watch face types. Venkatesan says that his research led him to be impressed with Apple's dedication to design, as it's clear that Apple took the time to study the history of many of the classic watch faces that are available in a digital format on the Apple Watch.

As I researched and wrote this essay, my respect only increased. With the watch faces, Apple could have taken the easy way out by merely mimicking existing watch archetypes at a surface level. Instead, they intensely studied each one's history. When designing each face, they took into account that history and the constraints and opportunities afforded by modern technology.

For those interested in the history of the Apple Watch and those who want to know more about the classic watches that have inspired Apple's designers, Venkatesan's article is well worth reading through.

AvisDeene
Just something about a round watch that makes it more appealing than the Apple Watch. I hope apple decided to come out with two form factors in the future.
Score: 12 Votes (Like | Disagree)

As I've never liked round watches, it would be nice for people to have a choice.

I don't know you but I already like you. We need more people like you in the world, who don't bash on others for their difference in tastes. I know this comment was probably something trivial to you, but you made my night, thank you.
Score: 6 Votes (Like | Disagree)

jonnyb098
Brilliantly done! The last couple versions of WatchOS show how Apple is still dedicated to the timekeeping history of watches while brining it into the future.
Score: 5 Votes (Like | Disagree)

HiVolt
I truly wish that there was an app store for watch faces. Apple is limiting the usefulness of the smart watch, IMO. Every year they add a few faces that are more artsy fartsy, rather than functional.

There hasn't been a truly new useful watch face in 3 years, that being Infograph from the Series 4. It's still what I use, because the others all have less information. And they still can't figure out how to allow all complications on all the watch faces.
Score: 5 Votes (Like | Disagree)

Yeah, I definitely thought we'd see it by now, 6 generations into it and 7 OS versions.
Score: 4 Votes (Like | Disagree)
Read All Comments