WhatsApp has opted to delay new privacy policy changes that have led to a significant amount of confusion over data sharing with Facebook, WhatsApp announced today. The planned privacy policy update will be delayed for three months, but it is not canceled. 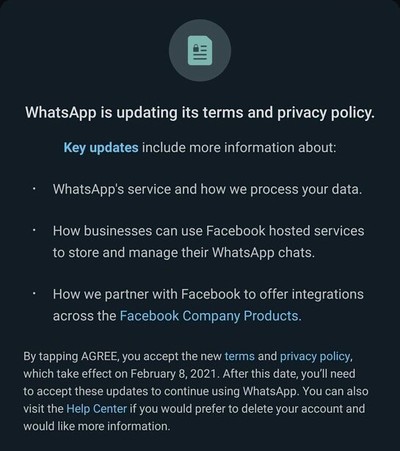 According to WhatsApp, there's been "a lot of misinformation" leading to concern about the update. WhatsApp clarifies that the update does not expand its ability to share data with Facebook and is instead simply providing further transparency about how user data is collected and shared when using a new tool for messaging a business on WhatsApp.

With these updates, none of that is changing. Instead, the update includes new options people will have to message a business on WhatsApp, and provides further transparency about how we collect and use data. While not everyone shops with a business on WhatsApp today, we think that more people will choose to do so in the future and it's important people are aware of these services. This update does not expand our ability to share data with Facebook.

WhatsApp is now planning to move back the date on which people will need to review and accept the new terms and conditions to use the WhatsApp app, and no accounts will be deleted or suspended on February 8, which was the original date WhatsApp planned to enact the new policy. WhatsApp will now "do a lot more" to clear up misinformation about how privacy and security works, and then will make the new business options available on May 15.

We want to address some rumors and be 100% clear we continue to protect your private messages with end-to-end encryption. pic.twitter.com/6qDnzQ98MP — WhatsApp (@WhatsApp) January 12, 2021

WhatsApp first announced its new usage terms in early January, and the changes at the time suggested WhatsApp would share additional data with Facebook such as phone number, service-related information, IP address, and transaction data, but WhatsApp has since made it clear that the update does not affect data sharing with Facebook in terms of user chats or profile information, with the new terms instead applying to those who use the business chat feature.

Though there is a delay in the rollout of the new privacy policy, WhatsApp told The Verge that there will be no changes. The update is designed to make it clear to users that messages to businesses could be stored on Facebook servers, necessitating data sharing between the two companies. Facebook will be able to use that data for ad targeting and to improve its digital commerce business.

Serban55
What else they could have said after a lot of people leaving whatsapp....
Score: 15 Votes (Like | Disagree)

rictus007
iMessage + signal .... no need to clarify anything, we know Facebook and their practices
Score: 14 Votes (Like | Disagree)

heov
Facebook gets a lot of hate on these boards, but we should also remember that this board is a bubble. FB alone has over 1.8 Billion daily active users, and almost 3B monthly.

You may read about Signal's boost in downloads, but what kind of dent was actually made?

FB's privacy intrusions are not new, yet they continue to grow. Most people simply don't care.

Wednesday May 12, 2021 10:03 am PDT by Juli Clover
Apple's M1 iMacs are set to start delivering to customers next week, and ahead of the official launch day, benchmarks for the machines have been showing up on Geekbench, likely from reviewers who are testing them. It will come as no surprise that M1 iMac benchmarks are right on par with benchmarks for the M1 MacBook Pro, MacBook Air, and Mac mini, coming in with an average single-core score...
Read Full Article • 268 comments