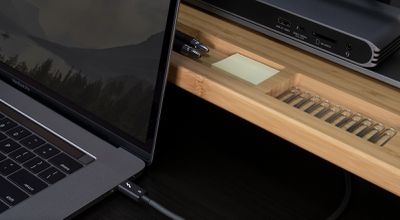 The dock also has a Thunderbolt 4 port that allows it to be connected to a Mac with a single cable, with up to 94W of pass-through charging for the latest MacBook Pro and MacBook Air models. The dock can be used with up to two 4K displays at 60Hz, but keep in mind that the new M1 Macs officially only support one external display.

Given that Thunderbolt 4 shares the USB-C port design, the dock is also compatible with the latest iPad Pro models and other USB-C devices.

The dock is priced at $219.99 in the United States and listed as in stock on CalDigit's website, where UK customers can also buy it. For customers in the rest of Europe, CalDigit says the dock will be available to purchase on Amazon starting later this month.

CalDigit has also introduced a new Thunderbolt 4 cable that works with any USB-C device, including Macs, providing up to 40Gb/s data speeds and up to 100W of power delivery. A 0.8-meter version of the cable is available now for $29.99 on CalDigit's website, and a two-meter version is slated to begin shipping in February.

OWC also introduced a Thunderbolt 4 dock last week that may be worth checking out for customers who are considering purchasing one.

Update: CalDigit has clarified that this is officially a Thunderbolt 3 dock with Thunderbolt 4 compatibility, although the specifications are virtually identical for Macs.

AngerDanger
Half a second after that picture was taken:

Apple Knowledge Navigator
Does it come with the paperclips?
Score: 13 Votes (Like | Disagree)

dwaltwhit
If I am dropping this much money, I plan on having it a long time. I think I'd rather see more USB-c than a. Not all, but maybe 3 C's and an A?
Score: 13 Votes (Like | Disagree)

If Apple’s latest macs are Thunderbolt 3, I don’t see the advantage of a Thunderbolt 4 hub.

The M1 can't technically market its ports as TB4 because they don't support the number of video outputs required for TB4 certification. But they do use updated controllers, so they're more akin to TB4, vs. older TB3 tech.
Score: 6 Votes (Like | Disagree)
Read All Comments