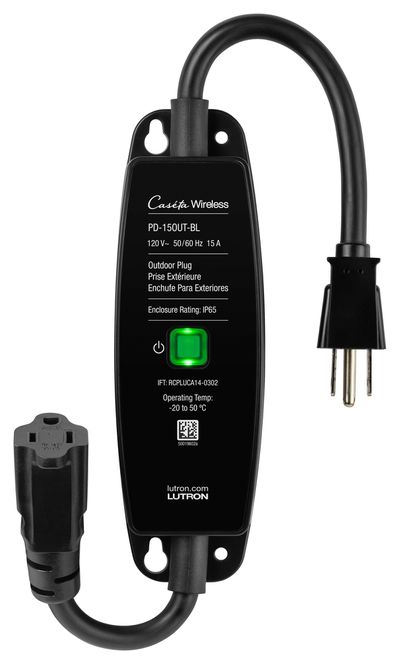 The Caséta Outdoor Smart Plug has an IP-65 water and dust resistance rating that allow it to be protected even in the rain. Lutron says that it is built to last and will survive severe weather "season after season."

The Smart Plug can be used for holiday lights, string lighting, some motors and pumps, and other outdoor lighting options. It is HomeKit compatible and can be controlled in the Home app or through the Lutron app for scheduling purposes. There's a built-in smart timer that keeps it on the right time year-round, even through Daylight Savings.

The Caséta Outdoor Smart Plug can be used with a Lutron Smart Bridge for increased reliability and responsiveness, plus the plug can be paired with other Caséta lighting products.

Lutron will start selling the Caséta Outdoor Smart Plug in late March at Amazon, Best Buy, Home Depot, and Lowe's, and it will be priced at $79.95.

macwhiztech
This is a no-brainer for HomeKit enthusiasts. The Caséta devices just work, first time, every time. Hue devices often fail to respond, iHome devices go out to lunch and need a reboot every few months (and iHome's leaving the market), but Caséta just plain works. I have never had to troubleshoot a Caséta device.
Score: 5 Votes (Like | Disagree)

pubb
Seems like the holiday season would have been the time to launch this, but hey.
Score: 2 Votes (Like | Disagree)

Seems like the holiday season would have been the time to launch this, but hey.

Yep, just in time for my Christmas lights...
Score: 1 Votes (Like | Disagree)

This is a no-brainer for HomeKit enthusiasts. The Caséta devices just work, first time, every time. Hue devices often fail to respond, iHome devices go out to lunch and need a reboot every few months (and iHome's leaving the market), but Caséta just plain works. I have never had to troubleshoot a Caséta device.

Agree. In general it’s better to install a hub-and-spoke system where devices are controlled from a proprietary transmitter (Lutron Connect Bridges use their “Clear Connect Wireless” protocol). The other paradigm ([S]Hue[/S], Leviton, etc.) has each device being its own WiFi device, and that’s a recipe for headaches. We have a Lutron RA2 Select smart home with about 40 devices, mostly switches but also sensors and a couple of shades. Not only has it all been rock solid since day 1, but updates and program changes are a breeze and HomeKit integration is completely transparent.

Edit: it was correctly pointed out that Hue is not WiFi based.
Score: 1 Votes (Like | Disagree)

Rychiar
Figures they release one now that I just had an electrician put in 2 iDevices in wall outlets into outdoor power receptacles outside my house. Of course I was really hoping Lutron would make one of those
Score: 1 Votes (Like | Disagree)

The other paradigm (Hue, Leviton, etc.) has each device being its own WiFi device,

I don't know what Leviton does, but this is absolutely not true for Hue. Hue uses Zigbee (Zigbee Light Link initially, Zigbee 3.0 compatible now), and the Hue Bridge has only an Ethernet connection, so there is no Wi-Fi necessarily involved at all (and in a Light Link network, the bulbs and accessories will mostly keep functioning on their own without a Bridge, which isn't really a "hub" in that sense). Zigbee is designed to be a mesh network, so mains-powered devices acts as "repeaters" (routers in Zigbee terms) for all devices to find a path they need to other devices on the network, often the Bridge to a bulb or accessory. The latest generation also supports Bluetooth, but that's really for people who just want to use the app to control a few bulbs; you'll need the Bridge (and Zigbee) for the full feature set, which is what I'm talking about here--though it should be noted that this other option is still BT and not Wi-Fi.

This is actually one advantage Hue has over Lutron's ClearConnect protocol, which is not mesh: arbitrarily large range. Lutron lets you add up to two "extenders," but that is a fairly new feature. For more range, you'll need a "full" RA2 system where you can add more RA2 Main Repeaters or Auxiliary Repeaters. That being said, ClearConnect does have lots of advantages: not being mesh means you never have to worry about some routing oddities that occasionally plague Zigbee (but usually not with simple networks like Hue/ZLL); they use a low-frequency less-crowded bandwidth; and their products have a well-deserved solid reputation (though I'd say Hue does too).

What you mentioned, however, is one reason I wouldn't fill my house with devices like LIFX or Shelly--or even lots of HomeKit-compatible plugs I see here from time to time. Nothing against Wi-Fi itself (I do have several Wi-Fi "smart" devices), just probably not the best protocol for large numbers of these things.
Score: 1 Votes (Like | Disagree)
Read All Comments

Thursday February 3, 2022 5:41 am PST by Hartley Charlton
A federal judge in the U.S. has dismissed a proposed class-action lawsuit that accused Apple of misleading customers about the iPhone's water resistance (via Reuters). Apple has extensively advertised the water resistance of the iPhone in its marketing campaigns since the launch of the iPhone 7, including the claim that some models can survive depths of up to four meters for 30 minutes....
Read Full Article • 111 comments

Monday November 15, 2021 12:46 pm PST by Juli Clover
Sam Jadallah, Apple's head of Home Services, left the company last week after two years leading some of Apple's work on smart home initiatives. Jadallah announced his departure on LinkedIn, where he said that it was "a treat to be an entrepreneur within Apple and to create products at scale." Based on some of his tweets, Jadallah worked on digital key-related projects, such as Apple's recent ...
Read Full Article • 129 comments