Apple is reportedly working on a fix for the Bluetooth connectivity problems that some M1 Mac users have experienced since the new machines were launched back in November. 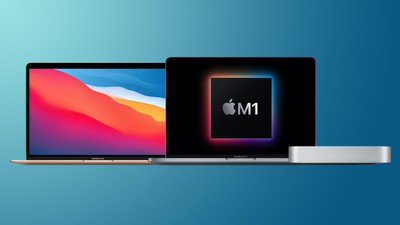 Until recently, there was no consensus on whether the issues were due to a software problem or something more deep-seated, since Apple has not commented on the issues. However, The 8-Bit notes that The Atlantic writer Ian Bogost, who has personally run into Bluetooth problems, tweeted on Sunday that Apple told him "a fix is in progress and forthcoming just about anytime."

Solved my M1 Mac Bluetooth issues by plugging in my keyboard and buying a Logitech mouse with its own Bluetooth dongle. (Apple tells me a MacOS fix is in progress and forthcoming just about anytime. But jeez.) — Ian Bogost (@ibogost) January 10, 2021

The development will be welcomed by anyone whose use of an ‌M1‌ Mac has been blighted with the issues, which reportedly affect third-party accessories like Bluetooth mice, keyboards, and headphones, as well as Apple products such as AirPods, Magic Mouse and Magic Keyboard.

‌Mac mini‌‌ owners have been worst affected, with the problems compounded by the fact that many rely on wireless peripherals to interact with their Mac in order to free up available ports. Some MacRumors staff members have also experienced similar problems.

Apple hasn't specified what's included in the coming ‌‌macOS Big Sur‌‌ 11.2 update, a beta of which is already in the hands of developers and public testers, but it likely includes performance improvements, security updates, and fixes for bugs that weren't able to be addressed in the release version of ‌‌‌‌macOS Big Sur‌‌.

howtocookforfortyhumans
Not a new problem! About half of my MacBook Pro models in the past years had serious problems with the built in Bluetooth. Sadly its also not just an apple problem, my desktop PC with MSI B550 mainboard has the same issue. How in the world can it be that nobody checks this??? If internal bluetooth is difficult because of interference or whatever, just don't put it in there and advertise it!!
Score: 12 Votes (Like | Disagree)

tillathenun
It can't come soon enough. The M1 Mac mini is an amazing machine but this - and not waking up Thunderbolt Display from sleep - has made me want to throw it out the window.
Score: 12 Votes (Like | Disagree)

MRrainer
At least, they can't blame Intel with this one.
Score: 10 Votes (Like | Disagree)

Morod
I have this same problem with my 2017 Intel iMac since upgrading to Bg Sur 11.1
Score: 8 Votes (Like | Disagree)

mobilemario
Had daily issues with my Mac keyboard and trackpad randomly disconnecting.
Unplugged the Logitech MX mouse and it's fine since.

Also I don't think the issue relates to M1 Macs only. Had same problems with my 2018 Mac mini.
Score: 7 Votes (Like | Disagree)

Kazgarth
While at it, it would be great if they implement a system UI scaling for monitors. As right now, the scaling is horrible (not HiDPI) if you set the screen resolution to anything that is not native, and there is no slider for UI scaling like in Windows.

There used to be a work-around using SwitchResX application, but the M1 stopped supporting custom resolution configurations.

Also the screen wake up time is quite long compared to anything on Windows.
Score: 7 Votes (Like | Disagree)
Read All Comments

Sunday February 21, 2021 11:08 am PST by Joe Rossignol
In an internal memo this week, obtained by MacRumors, Apple informed service providers that it is aware of and investigating an issue that may result in "pink squares or pixels" appearing on displays connected to an M1 Mac mini. Image via Twitter user @FatihVidyograf This issue has been reported by users across the Apple Support Communities, MacRumors Forums, and Reddit since the M1 Mac mini...
Read Full Article • 129 comments