A new report by Sensor Tower reveals that 2020 has been a record-setting year for worldwide spending on the Apple App Store and Google Play Store, which collectively passed $100 billion in a single year for the first time ever in November. 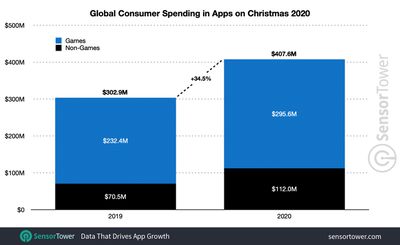 The trend of increased spending continued over Christmas, when consumers around the world spent an estimated $407.6 million across Apple's ‌App Store‌ and Google Play. This represents a 34.5 percent year-on-year growth from approximately $303 million in 2019. At the same time in 2019, spending only increased by 17.1 percent year-on-year.

Spending on Christmas day constituted 4.5 percent of December's total spending so far, which reached nine billion dollars globally on December 27. The majority of holiday spending was on mobile games, which climbed by 27 percent from $232.4 million at the same time last year to $295.6 million.

Tencent's "Honor of Kings" was the leading game with approximately $10.7 million in consumer spending, which is a 205.7 percent increase from Christmas 2019. TikTok was the top app for spending outside of games, generating $4.7 million globally.

In the United States, consumers spent almost $130 million across both app stores this Christmas, which is a 38.7 percent growth year-on-year and exceeds global growth by six points.

djcerla
$100B? These figures are shocking.

And Apple gets 2x Google’s revenue despite the smaller installed base. Apple defied every Wintel-era wisdom with its ecosystem.
Score: 7 Votes (Like | Disagree)

TVreporter
In first: Apple is doomed!

Guess they don’t miss Fortnite too much.

My son plays Roblox with his friends - fun mix of games. He prefers it over the Nintendo Switch as multiplayer is so much easier to do.
Score: 6 Votes (Like | Disagree)

This is exactly why another reader had commented in a previous article last week about the small business price scheme changes, and that it was cruddy Apple made the changes effective date after the new year.

Why is it cruddy? When Apple makes money, so does the dev. I guess I don't see it that way.
Score: 5 Votes (Like | Disagree)

People selling their souls to their gadgets...they will realize they wasted their time on this earth when they take their final breath...

They will know in that final moment, that they soul their soul to this company and worshiped their devices like false idols.

The creator left us a planet that is beautiful and abundant with resources & nature...instead these lemmings decide to play games all day and stare at screens for decades of their lives....

I liberated myself, quit all drugs & alcohol, went vegetarian & set out to conquer this planet...if I take my last breath today, then I die knowing I did everything humanly possible to reject what these Technocrats have attempted to unleash since the passing of Steve Jobs...

Gadgets can mean anything including but not limited to iphones, eg life saving pacemakers. However apps can range from the ridiculous to the sublime. And it's been shown that playing games when you are older increases mental capacity (so my wife tells me).
Score: 4 Votes (Like | Disagree)

bruh how? most apps are free

Bruh! I hope you realize that most apps that are free contain In-App purchases so they are not free.
Score: 3 Votes (Like | Disagree)

$100B is chump change nowadays, less than the net worth of the richest folks. Wake me up when it hits $1T.

Friday August 12, 2022 12:46 pm PDT by Juli Clover
Samsung this week launched its fourth-generation foldable devices, the $1,000 Galaxy Z Flip and the $1,800 Galaxy Z Fold. Though there's no sign of a comparable Apple foldable device on the horizon, rumors suggest prototypes are in the works, so we thought we'd take a look at Samsung's newest smartphones to see what Apple needs to measure up to when a foldable iPhone does come out. Subscribe ...
Read Full Article • 259 comments