As Epic Games' dispute with Apple continues on, the gaming company has teamed up with Samsung to send "Free Fortnite" swag out to influencers. 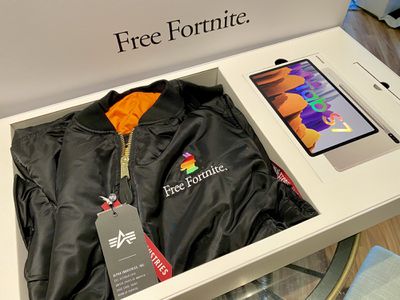 The gift package, which was shared by Kinda Funny's Greg Miller, includes a "Free Fortnite" jacket with a rainbow-colored llama logo and a Galaxy Tab S7 tablet from Samsung. A note included with package has a reminder that Fortnite is available from the ‌Epic Games‌ app on the Galaxy Store.

Fortnite was named the Samsung Galaxy Store Game of the Year for 2020. In celebration, we've teamed up with Samsung to send you a special box of #freefortnite gear.

While Fortnite may not currently be available on the App Store or Google Play, you can still get the latest Fornite updates directly from the Epic Games app on the Galaxy Store. Spread the word, #freefortnite.

Fortnite was pulled from the App Store on iOS devices back in August after ‌Epic Games‌ decided it would no longer pay Apple's fees for in-app purchases. ‌Epic Games‌ added a direct purchase option for Fortnite currency in the app, breaking Apple's ‌App Store‌ rules and resulting in Apple removing the app from the ‌App Store‌.

Fortnite then launched an anti-Apple PR campaign and filed a lawsuit against Apple accusing Apple of imposing "anti-competitive restraints" on apps, and employing "monopolistic practices in markets" to "block competition and stifle innovation."

Since then, the two companies have been embroiled in a legal battle and Fortnite has refused to comply with the ‌App Store‌ terms to get the app back in the ‌App Store‌ while the lawsuit plays out. Fortnite is no longer available on the ‌App Store‌, and players who had the app downloaded before are unable to get updates. Google too is facing a lawsuit with ‌Epic Games‌ and has also removed Fortnite from the Play Store.

‌Epic Games‌ and Apple are set to face off in court in July 2021, and it's unlikely Fortnite will return to the ‌App Store‌ before then. The Fortnite app is also unavailable on macOS, but can be played on PCs, consoles, and Android-based mobile devices, and it will soon be available on iOS through GeForce NOW.

GizmoDVD
The amount of money Epic is losing from this is amazing. Players have moved on, and they won't ever recover no matter how many franchise deals they try and secure.
Score: 86 Votes (Like | Disagree)

applicious84
Probably not the best time, but I wonder if influencer and influenza have the same root
Score: 47 Votes (Like | Disagree)

fncd
Epic takes a little jab at the original Apple logo with rainbow colors, and a bite out of the neck, then tops it off with the Apple Garamond typeface.

Not a good look.
Score: 38 Votes (Like | Disagree)
Read All Comments

Thursday August 13, 2020 11:58 am PDT by Juli Clover
Just hours after Epic Games introduced a new direct payment option for Fortnite that skirts Apple's in-app purchase rules, Apple has pulled the Fortnite app from the App Store. Fortnite is no longer available for download on the iPhone or the iPad, and Apple provided a statement to MacRumors on Fortnite's removal:Today, Epic Games took the unfortunate step of violating the App Store...
Read Full Article • 969 comments