The popularity of iPhone 12 models has led to soaring demand for Qualcomm's 5G modems and RF chips, helping to propel the chipmaker's revenues past that of rival Broadcom in the third quarter of 2020, according to Taiwanese research firm TrendForce. 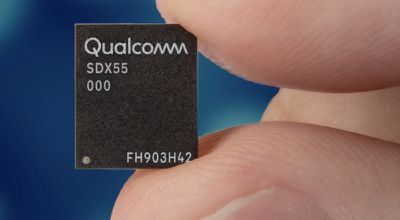 Apple's rekindled partnership with Qualcomm might not be for good, however, as Bloomberg recently reported that Apple has started developing its own cellular modem for future iPhones. The info was reportedly shared by Apple's senior vice president of hardware technologies Johny Srouji at a town hall meeting with Apple employees, and the move was expected after Apple purchased the majority of Intel's smartphone modem business last year.

In a research note shared with MacRumors today, Barclays analysts Blayne Curtis, Thomas O'Malley, Tim Long, and their associates provided some additional details about Apple's in-house modem, claiming that the chip will be "very much a high-end modem" with support for ultra-fast mmWave 5G, as with Qualcomm's Snapdragon X55 modem in iPhone 12 models.

"We believe that Apple has actually been working on this 5G modem for over a year and that this is very much a high-end modem, including support and chipsets for mmWave," the analysts said. "We do not believe they are [working] on any RF components beyond the mmWave."

mmWave is a set of 5G frequencies that promise ultra-fast speeds at short distances, making it best suited for dense urban areas. By comparison, sub-6GHz 5G is generally slower than mmWave, but the signals travel further, better serving suburban and rural areas. mmWave support on iPhone 12 models is limited to the United States.

As part of their settlement in 2019, Apple and Qualcomm announced that they had reached a multiyear chipset supply agreement, so it likely that it will be at least a few more years until Apple's in-house modem appears in devices.

FocusAndEarnIt
This is not news.
Score: 6 Votes (Like | Disagree)

Well, in the lawsuit that was recently settled between the two companies, Apple agreed to license their chips for 5 years. We won’t be seeing Apple modems for quite some time, regardless of when they are actually ready.

Hmm, we'll see. The 5 year license doesn't necessarily require Apple to buy a certain number of QC modems every year and Apple will probably aim for some overlap between their own modems and the license expiring to make sure they have options.

In any case, developing, testing and certifying a modem does take time but I'm sure they're keen to get to enjoy that close integration they could have with an in-house design..

Then when they start using their own modem, QC will sue for patents ofcourse.
Score: 3 Votes (Like | Disagree)

In the meantime, Qualcomm keeps pushing the envelope. May the most innovative team win.
Score: 3 Votes (Like | Disagree)

Eso
Well, in the lawsuit that was recently settled between the two companies, Apple agreed to license their chips for 5 years. We won’t be seeing Apple modems for quite some time, regardless of when they are actually ready.
Score: 2 Votes (Like | Disagree)

Maybe there is some cross licensing going on. Wouldn’t surprise me.

Not just cross licensing, but Apple executed a six-year license of (presumably all of) Qualcomm’s IP last year, along with the chipset supply agreement, as part of the settlement agreement that ended all litigation between the parties worldwide.

Qualcomm has only a portion of the standards-essential patents—other major IP holders include Nokia, Ericsson and Huawei—but they do have the most valuable afaik. Apple’s 5G patents, which mostly come from the Intel deal, will save them money through cross licensing with those other 5G patent holders.
Score: 2 Votes (Like | Disagree)

Tec_Amigo
When will we get 5G on laptops and tablets?
Score: 2 Votes (Like | Disagree)
Read All Comments